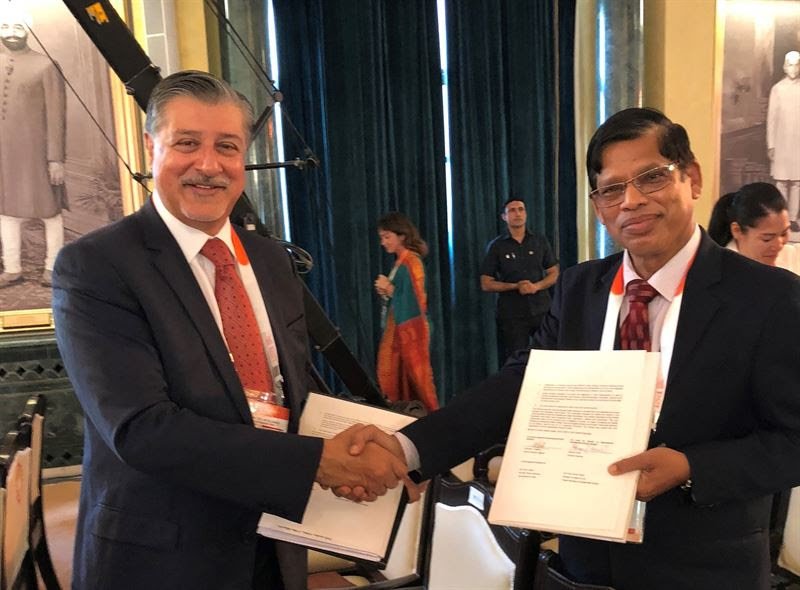 11 March 2018, Sweetcrude, New Delhi, India – Today, on the occasion of the Founding Conference of the International Solar Alliance (ISA), the Director General of the International Renewable Energy Agency (IRENA), Mr. Adnan Z. Amin, and the Interim Director General of ISA, Mr. Upendra Tripathy signed a Joint Declaration to deepen the cooperation between the two organisations to accelerate solar energy deployment.

“Driven by remarkable cost declines, innovative policies and new business models, solar energy has emerged as the fastest growing renewable energy worldwide. There is an immense opportunity at hand to bring its benefits to more and more countries around the world,” said Mr. Amin.

“IRENA estimates that solar must account for at least 35 percent of global power capacity by 2050 to meet the objectives the Paris Agreement on climate,” Mr. Amin added. “In this context, IRENA stands ready to work with ISA and its members to scale-up solar energy deployment as a means to expanding affordable, reliable and sustainable energy access, as well as to addressing climate and energy security concerns. IRENA looks forward to strengthening collaboration with ISA, sharing its knowledge and experience, and making available its project facilitation tools and platforms.”

“The International Solar Alliance has a well-articulated goal to facilitate the mobilisation of USD 1 trillion of capital to rapidly accelerate the adoption of solar energy all over the world,” said Upendra Tripathy, Interim Director-General of the International Solar Alliance. “While solar is fast becoming one of the most cost-effective ways to generate new power and deliver energy access, to deploy fast enough, complementarity must exist between our work and the broader renewable energy mandate and development tools established by IRENA. This fusion of capabilities will help to catalyse solar development in line with the goals set out under the Paris Agreement.”

Driven by rapid advances in technology and economies of scale, the cost of electricity from solar photovoltaics decreased by almost 70 percent between 2010 and 2016. IRENA estimates that average cost of electricity from solar photovoltaics can decrease by further 60 percent in the coming decade. Solar power is also a significant employer of people worldwide, with around 3.1 million jobs working in the sector in 2016.

The Joint Declaration affirms the commitment of the IRENA and ISA to collaborate on advancing solar deployment and projects through helping countries develop policies and regulations around solar energy and through the implementation of IRENA initiatives such as the Clean Energy Corridors and the SIDS Lighthouses. IRENA’s project facilitation tools and platforms such as the Global Atlas for Renewable Energy, the Project Navigator, and the Sustainable Energy Marketplace will be made available to ISA, in support of its project-focused work in countries.

The Founding Conference of ISA, co-chaired by PM Modi and President Macron, is taking place at the Rashtrapati Bhavan Cultural Center in New Delhi and is being attended by heads of state and government, ministers, heads of international organisations and other high-level officials.

International Renewable Energy Agency (IRENA)
IRENA is a global intergovernmental organisation with 156 Members (155 States and the European Union) and an additional 24 states in accession, supporting countries in their transition to a sustainable energy future. IRENA serves as the principal platform for international co-operation, a centre of excellence, and a repository of policy, technology, resource and financial knowledge on renewable energy. IRENA promotes the widespread adoption and sustainable use of all forms of renewable energy in the pursuit of sustainable development, energy access, energy security and low-carbon economic growth and prosperity.

International Solar Alliance (ISA)
The Paris Declaration establishes ISA as an alliance dedicated to the promotion of solar energy among its member countries. The ISA’s major objectives include global deployment of over 1,000GW of solar generation capacity and mobilisation of investment of over US$ 1000 billion into solar energy by 2030. As an action-oriented organisation, the ISA brings together countries with rich solar potential to aggregate global demand, thereby reducing prices through bulk purchase, facilitating the deployment of existing solar technologies at scale, and promoting collaborative solar R&D and capacity building.

When the ISA Framework Agreement entered into force on December 6th, 2017, ISA formally became a de-jure treaty-based International Intergovernmental Organization, headquartered in India. As of now, the ISA Framework Agreement has been signed by 48 countries, with 19 of them also depositing the instruments of ratification with the Ministry of External Affairs, Government of India. The ISA is headquartered at Gurugram, near Delhi in India, and H.E. Mr. Upendra Tripathy is the Interim Director General of ISA.