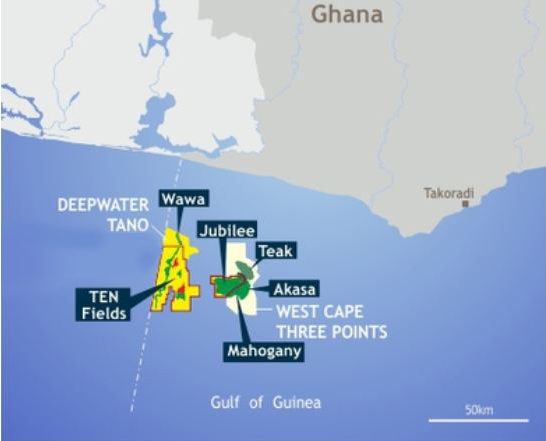 10 June 2018, Accra, Ghana — Italy’s ENI is on track to deliver the first gas from its Ghana operations this month, with output rising to 180 million cubic feet per day, enough to more than double national output by year end, officials told Reuters on Friday.

ENI, which began oil production from 45,000 barrel-per-day reserves a year ago, will start pumping natural gas on June 26 from its Sankofa reserves in a second phase of the company’s $7.9 billion Offshore Cape Three Point project.

“We are on track and working full speed to deliver this month,” an ENI source told Reuters, declining to be named until an official announcement.

The source declined to say what early output levels would be but said an earlier target of 180 million standard cubic feet per day would be reached in a matter of weeks.

Ben Asante, chief executive of Ghana Gas, told Reuters he expected Ghana’s total output to be between 300 million and 350 million cubic feet per day by year-end when ENI’s project is on tap.

“This will sufficiently meet our power needs with some excess for non-power uses,” Asante said.

Presently, the country uses around 95 percent of its gas supplies on power generation, Asante said. Ghana is obliged to use light crude oil to supplement.

Ghana, which also produces cocoa and gold, plans to use its increasing petroleum resources to revive an economy dogged by high public debt and deficits, forcing the government to sign a $918 million credit deal with The International Monetary Fund.