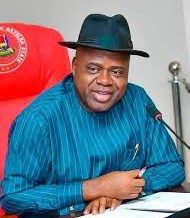 Port Harcourt — Bayelsa State Governor, Douye Diri has backed the need for states to start collecting Value Added Tax, describing it as injustice, disservice and unfair for multinationals to drill crude oil in the state, while their employees’ income tax is paid to Lagos State.

The governor explained that it was meaningless for oil companies to cite insecurity as their reason for not relocating their headquarters to Bayelsa State.

Speaking at the just concluded 2nd edition of NCDMB Research and Development Fair and Conference, the governor said Bayelsa State was more peaceful than many states in the country.

He recalled that in 2017, then Acting President Yemi Osinbajo, directed oil multinationals operating in the Niger Delta, to relocate their headquarters to their states of operation to mitigate tension in host communities.

“Bayelsa State Government feels short-changed, in terms of what we are getting from the oil and gas industry; despite the efforts we are making to ensure peace and tranquility in the industry.

“We believe the relocation of the IOCs to Bayelsa State should not be further delayed.

“This was a pronouncement by the Vice President of our country, Prof Yemi Osinbajo, some three or four years ago. So, we believe the time for its manifestation has become very necessary.

“We strongly feel it is unfair for the IOCs to carry out their operations in Bayelsa, yet the PAYE income tax is collected in Lagos. That is a case of somebody eating the beans and asking another person to have diarrhea.”

Governor Diri represented at the event by the governor, Lawrence Ewhrudjakpo, maintained that the delay of oil multinationals to relocate to the state was a great disservice and injustice.

He added that IOCs had no reason not to relocate to the state, considering the enabling environment in terms of security and improved means of transportation, especially the commencement of flight operations at the Bayelsa International Airport.