IYC warns against tenure elongation for current NDDC board

on: December 27, 2017In: Community Development, featured 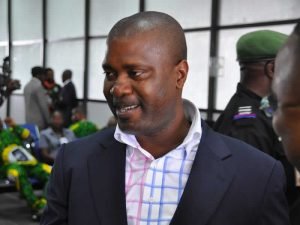 26 December 2017, Sweetcrude, Port Harcourt – The Ijaw Youths Congress, IYC, has warned the Federal Government against extending the tenure of the current management board of the Niger Delta Development Commission, NDDC.

Mr. Pereotubo Oweilaemi, the leader of one of the factions of IYC, gave the warning in Port Harcourt, urging President Muhammadu Buhari to respect the established rotational policy among the NDDC member states in the appointment of the board as contained in the Act that established the Commission.

Maintaining that any attempt to extend the tenure of the current board would cause another round of crisis in the region, he stated that Nsima Ekere-led administration expired on December 16, 2017, and must not be allowed to resume in January 2018.

Oweilaemi, who spoke during a protest by the IYC at the NDDC headquarters in Port Harcourt, called on President Buhari to make new appointments in line with the policy of rotation among the member states.

According to him, “We are in front of this Commission that was established to cater for the needs of the people of Niger Delta as a result of the failure of the Managing Directors of the NDDC to deliver the essence for the establishment of the commission to the people.

“People that have been appointed to take charge of this place have always played politics with our blood. We want to tell President Muhammadu Buhari and the world that NDDC has not done well. We are here today to protest against an illegal and unacceptable tenure elongation obtained by the board.”

The IYC President explained that the current board was appointed to complete the tenure of Akwa Ibom State which was started by Mr. Dan Abia (immediate past MD of NDDC).

Oweilaemi accused Ekere of scheming to take over the tenure which, according to him, belonged to another state in the region.

“This present administration was appointed to complete the tenure of Akwa Ibom, which has expired on the 16th December 2017 and Nsima Ekere completed it.

“We are demanding that the administration of Ekere should not resume in January because their tenure has elapsed,” he said.

The Ijaw Youth President further called on the National Assembly to wade into the matter and commence the process of appointing another board, warning that if the current board resumed in January 2018, “there would be persistent protest in the region.‎”