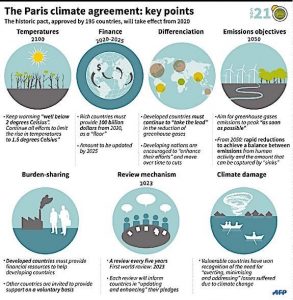 Tokyo — Japan’s cabinet adopted a long-term emissions reduction strategy under the Paris Agreement on Tuesday, including the goal to be carbon-neutral soon after 2050.

The policy includes plans to innovate in areas such as hydrogen and carbon dioxide (CO2) capture and utilization, but did not give a specific target for phasing out low efficiency coal-fired power plants, or a roadmap for a carbon tax.

Japan has been criticised for its heavy use of coal-fired power generation and plans to build new coal-fired plants.

It also includes plans to cut the cost of producing CO2-free hydrogen to less than one-tenth by 2050.

The latest document fleshes out how to reach commitments made under the 2015 Paris Agreement to keep the rise in global temperatures below 1.5 to 2 degrees Celsius.

The goals mostly reflect recommendations made in April by a government-run panel of academic experts and business leaders.

It will be submitted to the United Nations before June 28-29, when Japan hosts a Group of 20 summit in Osaka, a government official said.