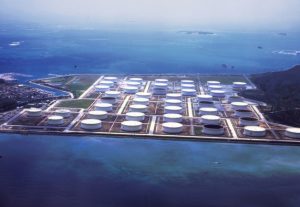 The CME Group Petroleum Index Futures, which began trading on the JEG’s Osaka Exchange on Tuesday, opened at 173.60 yen and closed 0.15 yen lower at 173.45 yen.

Trading volume came to 439 contracts, Osaka Exchange said in a statement on its website.

By contrast, just over 76,000 West Texas Intermediate (WTI) oil futures contracts had changed hands on the New York Mercantile Exchange on Tuesday by around 1030 GMT, according to Refinitiv Eikon data.

The CME Group Petroleum Index represents a basket of three energy instruments including WTI, with the heaviest weighting, gasoline futures and heating oil contracts . The U.S. dollar contracts trade on the New York Mercantile Exchange, a part of the Chicago Mercantile Exchange.

In the year to the end of August the CME index had a “correlation coefficient” of more than 0.99 with prices of WTI, which along with Brent crude is an international benchmark, the exchange said earlier.