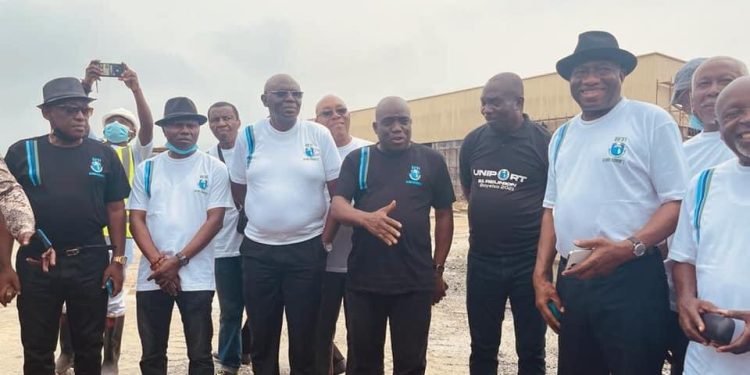 *Ex-President-Goodluck-Jonathan with some members of the 1981 pioneer set of the University of Port Harcourt, Rivers State.

The former President visited the first oilwell in company with his former classmates, the 1981 class of the University of Port Harcourt, during their 2021 reunion in Yenagoa.

Other places visited by the old boys include, the ongoing Nigerian Oil and Gas Parks Project undergoing construction by the Nigerian Content Development and Monitoring Board, at Emeyal I, Ogbia Local Government Area, Bayelsa State.

The group were enthused by NCDMB’s efforts towards domiciling manufacturing capacities in-country and adding value to the oil and gas industry.

The former President in his verified Facebook handle, said “It was a delight to reconnect with my former school mates from the University of Port Harcourt, 40years after graduation at the ongoing Unique Uniport Class of 1981 Reunion in Yenagoa, Bayelsa State.

“Today was an eventful day as we visited notable sites in Bayelsa like the first oil well in Oloibiri, the Oil and Gas Park, a visit to our former lecturer Prof. E. J Alagoa, the pioneer Dean of Humanities at the University of Port Harcourt before proceeding to the Palace of King A.J Turner at Opume, Ogbia Kingdom for lunch and cultural fiesta.”

The delegation were received at the NOGAPS site by the Chief Supervisor, Strategy, Mr. Olubisi Okunola and Manager NCDMB Properties, Mr. Taridouye Gagariga.