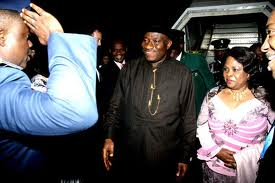 27 October 2011, Sweetcrude, Perth- President Goodluck Jonathan has apparently not shied away from leading from the front with regards to his administration’s commitment towards developing the mining and minerals sector as a counter-force to oil and gas exploitation.

Speaking at an interactive dinner with leading Australian mining and solid minerals investors, in Perth, Western Australia, at the foreground of the meeting of Commonwealth Heads of Government, CHOGM, the President stressed that his administration will vigorously implement policies, programmes and projects that will ensure the rapid development of Nigeria’s solid minerals sector in the next four years in furtherance of its efforts to create more job opportunities for the country’s youth.

President Jonathan had kicked off his pre-Commonwealth Summit working visit to Australia earlier in the day by meeting with the Premier of Western Australia, Mr. Colin Barnett. Indeed, the choice of the location by the President to promote Nigeria’s potentials in the mining sector was apt, given that Western Australia with its huge solid minerals resources is the richest mineral region in Australia.

He told Mr. Barnett that his administration was working towards the full development of Nigeria’s solid minerals sector to expand and diversify the
country’s economic base. “We have a lot to learn from you in solid minerals development and we look forward to establishing mutually-beneficial partnerships with Australian investors
and industrialists,” he said.

The President also assured the gathering that his administration had the political will and commitment to fully implement all the regulatory reforms required to facilitate the entrance of more investors to Nigeria’s mining sector. According to him, Australian investors were also welcome to invest in other under-developed sectors of the Nigerian economy such as agriculture, noting that the country was blessed with vast arable land on which almost anything can be
grown.

The Minister of Trade and Investment, Mr. Olusegun Aganga who also spoke at the occasion, told the Australian investors that Nigeria had over 33 solid minerals in sufficient quantities for commercial exploitation. He also assured the assembled investors of the Jonathan Administrations total commitment to creating the enabling environment for the development of Nigeria’s solid minerals sector.

President Jonathan was at the head of Nigeria’s delegation which include the Minister of Mines and Steel Development, Arc. Musa Mohammed Sada, some governors from notable mining rich states in the country. One major immediate outcome of the session was the proposal by Mr. Hugh Morgan, a leading Australian solid minerals developer who co-chaired the interactive dinner, for the establishment of a Joint Nigeria-Australia Trade and Investment Commission to promote economic cooperation between countries.

Meanwhile, back home, the Federal Government’s efforts to raise the profile of mining in the country has received a direct assault by allegations of corruption, laxity and indecision on the part of government officials to implement regulations made for the sustenance of the mining industry.

The President of the Progressive Miners Empowerment Association, PMEA, Mr. Sunny Ekozin, who made the claims, lambasted officials for “deceiving Nigerians with exaggerated and embellished accounts of development and investment in the sector.”

According to Ekozin, who was speaking during the 1st National Miners’ Forum, organized in conjunction with the Nigerian Export Promotion Council (NEPC), in Abuja, stated that the claim by government officials and “the National Bureau of Statistics that the sector has contributed about 0.3 percent to the GDP is not true. We have asked them to provide scientific proof to support that claim, and they have failed to do so, so far.

“We know from operating within the sector over the years that there is no way such claim can be true; there is currently zero percent contribution by the mining sector to the GDP. If anything, the sector has only remained a parasite to the national economy as all the billions purportedly poured into the industry has not got anywhere; the mining sector in Nigeria is in crisis.”

Ekozin, a former President of the Nigerian Miners Association, further charged that the industry is presently being undermined and the environment is degraded by “unscrupulous businessmen, usually Chinese men, who have aggressively invaded and ravaged the industry. Due to the activities of these Chinese men who have invaded the mining localities across the country, local people have lost their lives from exposure to radio-active matters trying to mine stones which they sell to these businessmen, and no one seems bothered about that.”

He added that laws guiding operations in the sector are being flouted with the connivance of government officials, even as he implored the National Assembly to investigate numerous deaths of Nigerians due to exposure to radio-active materials while involved in artisanal mining.

According to him, “When in 2004, government went and took a $120 million loan from the World Bank in an exaggerated bid to revive the mining industry; we protested and were told by managers of this loan to keep quite. More than $40 million of that loan was meant for artisanal miners, but at the end of the day, not even $1 million got to them. The truth is that some day, our children will be made to pay for the loan that has so far been wasted by a few.”

Ekosin noted, however, that miners were confident in the Transformation Agenda of President Goodluck Jonathan with regards to the mining and minerals sector of the country, adding that more investments are needed to bring about the much-talked about revolution in the industry.