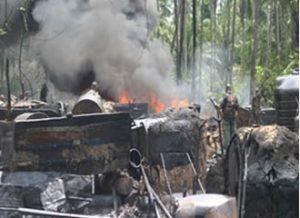 Port Harcourt — The Joint Taskforce operating in the Niger Delta region, codenamed Operation Delta Safe, OPDS, recovered a total of 40 million litres of illegal acquired crude oil from suspected oil thieves in the region between January and December 2021.
The Defence Headquarters, which disclosed this, said the JTF raided over 1,400 illegal oil refining camps, demobilising them and arresting 567 suspects, within the period under review.
Acting Director, Defence Media Operations, Major Gen. Benard Onyeuko, in a statement made available to SweetcrudeReports, said the JTF also recovered 67 million litres of illegally refined Automotive Gasoline Oil, AGO, commonly known as diesel.
Although the Defence Headquarters did not say how the seized AGO and crude oil were disposed of, Onyeuko added that 13 ships laden with crude oil cargo, nine barges, 137 trucks and other types of vehicles conveying illegally refined products were apprehended in 2021.
He said OPDS has been made into a multi-agency organisation comprising elements drawn from 12 different security agencies, adding that the JTF conducted several operations in 2021 to ensure safe and peaceful operation of the oil and gas industry.
The Defence Headquarters explained that due to the swampy, water logged nature of the Niger Delta terrain and the need to reduce fatigue on troops, most of the operations were intelligence-driven.
“The anti-crude oil theft efforts of the JTF during the period in consideration has led to the recovery of about 40 million litres of crude oil and 67 million litres of illegally refined products mostly AGO from criminals.
“Also, 13 ships laden with crude oil cargo, 9 barges, 137 trucks and other types of vehicles conveying illegally refined products were arrested.
“Additionally, thousands of illegal oil refining sites (each of which contains many camps), over 4,929 storage facilities and 536 large wooden boats, popularly called ‘Cotonou boats’ among others were demobilized.
“In the process of conducting these operations, 567 suspects were arrested in connection with various crimes. The suspects and exhibits have all been handed over to the appropriate prosecuting agencies for prosecution.
“While some of the arrested suspects have been convicted, others are still undergoing trials in various courts of law. Nonetheless, the JTF will sustain its anti-crude oil theft efforts until the crime is totally eliminated or reduced to the barest minimum.”