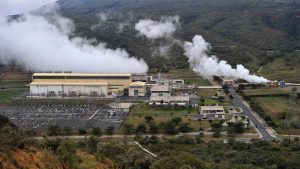 Geothermal steam, hot underground steam found in the Rift Valley which is used to drive turbines for electricity production, is the second biggest source of Kenya’s annual power generation of 2,336 MW, accounting for 26.84 percent of the total.

“Two generator units, each weighing 130 metric tonnes, departed the Port of Mombasa yesterday, signalling the beginning of the final process towards the completion of the plant,” the company said in a statement.

KenGen has an installed capacity of 1,631 MW and it plans to add an additional 720 MW by 2020 to cater for growing electricity demand, it said.