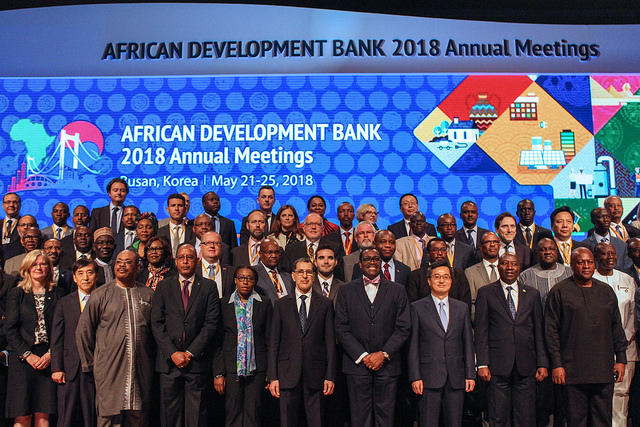 *Attendees, together with African Development Bank President Dr. Akinwumi Adesina and Minister of Strategy and Finance and Deputy Prime Minister of South Korea Dong Yeon Kim, pose for a group picture during the formal opening ceremony of the AfDB Annual Meetings in Busan, South Korea, 23rd of May 2018. Photo by Andres Toro.

24 May 2018, Sweetcrude, Busan, Korea – Korean President Moon Jae-in has committed to sharing Korea’s technological and industrial experience with Africa and to help it compete in the 4th Industrial Revolution.

His message came at the opening ceremony of the 53rd Annual Meetings of the African Development Bank. “Africa is no longer the sleeping lion. Korea is happy to share its industrial experience with the continent. The theme of the Annual Meetings is appropriate for the industrial transformation of the continent, and in facilitating the sharing of experiences with Korea and other partners.”

African Development Bank President Akinwumi Adesina thanked the Government of Korea for hosting the Bank’s Annual Meetings. He recalled Korea’s transformation from a poor nation 60 years ago to the 11th largest economy in the world, noting the contribution of industrialization to its transformation. “Today, Samsung and LG television and phones dominate globally, while Korean cars are everywhere. Korea was deliberate and consistent in its industrial drive like China and Japan. Africa must learn from Korea’s industrialization and the equally remarkable experiences of China, Japan, and other parts of the world.”

Young Africans can transform the continent given the chance. He described the experience of Clarisse Iribagiza, a young Rwandan woman who earned a master’s in Information and Communications Technology from the Kigali Institute of Science and Technology, a program supported by the Bank. With a modest contribution from the Government of Rwanda, Clarisse launched an ICT business that she recently sold that for US $10 million. She is now a member of the Bank’s Presidential Youth Advisory Council.

To unlock Africa’s potential through investment, the Bank has created the Africa Investment Forum, a transactional platform created by the African Development Bank with its partners to leverage global pension funds and sovereign wealth funds and other institutional investors to significantly invest in Africa. This new investment marketplace will set sail from November 7-9, 2018 from Johannesburg, South Africa.

Dong Yeon Kim, Deputy Prime Minister and Minister of Strategy and Finance of the Republic of Korea, said a new approach was urgently needed. He referred to Uncle Tom’s Cabin, a 19th-century American novel written by Harriet Beecher Stowe that envisioned a promising future for Africa.

“Harriet Stowe was right. Very surprisingly, we now witness strong evidence of Africa flourishing, just as she predicted. Growth in the region over the past 20 years was 3% higher than the previous period, and the absolute poverty ratio decreased to two-thirds of what it was two decades ago.”

“Industrialization policy should take into account the unique conditions of each country. New technologies can provide leapfrogging opportunities by speeding up the industrialization process and creating new value.” Smart infrastructure, he said, presents a promising area for Korea’s contribution.

“Smart infrastructure can provide a new solution to Africa’s shortage in roads, airports and harbours. It allows optimal use of resources and can even replace traditional infrastructure. Africa is already producing substantial outcomes in this area. Going forward, Korea is strongly committed to share its rich expertise and experience as Africa’s close partner.”

In his address, the Chairman of the African Union and Rwandan President, Paul Kagame noted that holding the Annual Meetings in Busan presents a unique opportunity to enforce the growth cooperation between Africa and the Republic of Korea.