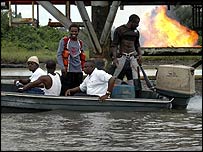 31 May 2013, Port Harcourt – THE people of Kula community in Rivers State, have threatened to shut down the operations of Shell Petroleum Development Company and Chevron Nigeria Limited in the area over alleged abandoned projects.

The traditional ruler of the community, HRH King Kroma Eleki, Sara XIV and his chiefs, said Shell had not met its financial obligation to the community for sustainable development since 2007, adding that the Group Memorandum of Understanding, GMOU, they signed with the oil company was aborted with the death of some of its chiefs, who were signatories to the account.

They said efforts to set up a new board to run the GMOU had been frustrated by some forces, adding that the community had forwarded a list to the Commissioner for Chieftaincy and Community Affairs, pointing out that if the renewed effort was frustrated, they would have no option than to shut down the operations of Shell and Chevron in the area.

“In a unanimous decision, the community, after considering what we contribute to the national economy with four flow stations, two gas injections and booster plants, agreed that a peaceful protest should be undertaken by the community to NDDC and Rivers State Government and letters of representations to be sent to the Presidency and other government agencies. If nothing positive comes out of that protest the community will shut down both Shell and Chevron operations in our area,” the community said.

The community also threatened to embark on a protest to Niger Delta Development Commission, NDDC, over a land reclamation, shore protection project awarded by the interventionist agency since 2009 that had been allegedly abandoned.
*Press statement, Kula community