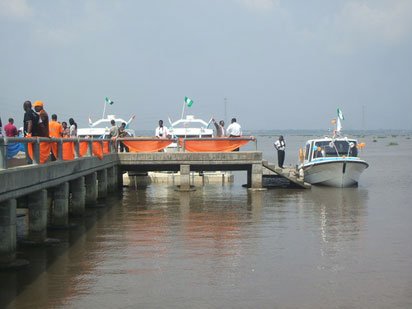 Lagos — The Lagos State Government has denied converting the Mile 2 jetty to a container terminal saying that it has concessioned the facility to a private ferry service operator.

Speaking to Sweetcrudereport at the 19th edition of NECCIPR Roundtable conference themed, ‘‘Awakening the Blue Giant- Catalyzing the Growth of Nigeria’s Maritime Economy Through Public Relations’’, held in Lagos, the state Governor, Mr. Babatunde Sanwo-Olu, said that the concessionaire has also concluded plans to move to the jetty to rehabilitate the facility with a view to beginning operation soon.

He also hinted that this development was in line with the government’s plans to leverage the state’s water resources for the development of its Blue Economy.

Sanwo Olu who was represented by the state’s Commissioner for Transportation, Dr. Fredrick Oladeinde, said that Lagos is the melting point for maritime trade in Nigeria adding that the government will give all needed support to ensure that maritime continues to thrive in the state.

He also said that the state was developing initiatives aimed at harnessing the opportunities on its water endowment for aquaculture, transportation and tourism adding that these initiatives will be driven by the private sector.

He explained that the Blue Economy concept is the next level of transformation for economies or states that have access to the sea or waterways.

He noted that there is a huge potential in the maritime sector adding that it has been established that the industry can serve as an alternative and sustainable source of revenue.

He stated: “These initiatives will be largely driven by the private sector and our focus will be on developing the necessary infrastructure and ensure that the environment is conducive enough to attract investments.

“I look forward to the outcome of discussions on this platform and I assure you that we will continue to work with the private sector and other stakeholders to grow the Blue Economy potentials in Lagos State and in Nigeria.

“I have no doubt that this roundtable will identify and recommend solutions to the critical issues in the maritime sector; the issues of safety and security, capacity building and inadequate maritime infrastructure among others.

“Given this fast unfolding reality, there is a need to address the issues and challenges being faced by the sector.

“Our focus must be on making our maritime sector globally competitive and also serve as a strong driver of economic growth and development.

“We must leverage on our strategic position in the Gulf of Guinea to make our country a force to reckon with and a choice destination in maritime business.’’

Earlier in her remarks, convener of the roundtable, Mrs. Nkechi Ali Balogun, said that ocean based assets and economic activities offer prospects for new source of growth, job and innovations.

According to her the concept of Blue Economy also offers possible solution to key environmental challenges such as alternative renewable energy through wind mills and ocean currents.

She stated: “The Nigerian government has been paying lip service to eco-tourism and coastal resources development all the years.

“No competent system has been put in place to address the pertinent issues of pollution and depletion of coast line or exploiting and or maximizing the potential of the coast line.”