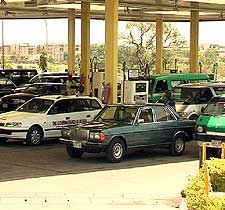 16 March 2012, Sweetcrude, LAGOS- The Federal Government through the Department of Weights and Measures of the Ministry of Trade and Investment, Thursday, sealed off Conoil Filling Station in Onipanu area of Lagos for allegedly under-dispensing petrol to unsuspecting motorists.

Speaking to journalists after the inspection in Lagos, Mrs Crescentia Erukpeme, Head, Weights and Measures, Lagos State, said they decided to seal the station so that the dealer can change or adjust the pump to conform to what was expected of him.

She said that the general inspection was to stop sharp practices observed in some filling stations, adding: “We recorded great success in most stations visited in Lagos Island, Ikeja, Ikorodu, Maryland, Ikoyi and Victoria Island, which demonstrated compliance with weights and measures standards.”

Erukpeme said that in keeping with the laws establishing the department, officers of Weights and Measures, Lagos office had embarked on the spot assessment of some flow meter pumps in some filling stations in Lagos metropolis to ensure strict compliance with the law.