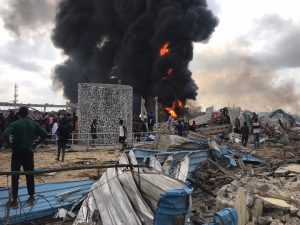 Lagos — The Lagos State Emergency Management Agency, LASEMA, has advised members of the public to take precautions in and around Amuwo Odofin Local Government Area of Lagos to prevent any form of explosion or ignition from naked flame or other activities.

Director General of LASEMA, Dr Olufemi Damilola Oke-Osanyintolu, gave the advice in the aftermaths of the recent pipeline explosion in Abule Ado, Amuwo Odofin Local Government Area, which claimed about 20 lives and destroyed over 70 buildings.

Alerting Lagosians, especially residents of Satellite Town of a fresh Nigerian National Petroleum Corporation, NNPC, pipeline leakage at Alhaji Moriamo street, revealed that it had been discovered that an NNPC pipeline along the axis at Ojukwu Street, Navy Town was leaking.

“We (have) contacted the NNPC who dispatched a repair team to the location. The agency and other first responders intend to remain on high alert until the repairs being carried out by the NNPC are fully completed,” he said.

He said a swamp buggy was being arranged to ensure thorough excavation and repair, adding that the area have been properly cordoned off to prevent hoodlums from the surrounding communities gaining access to the area to. “The pipeline remains shutdown until the repair is completed,” he said.