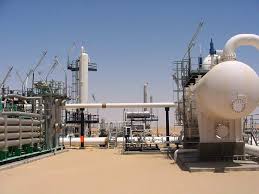 24 April 2017, Tripoli — Libya’s El-Feel oilfield is ready to resume production after a two-year halt in operations that crimped the OPEC nation’s output, but there’s a problem: It doesn’t have enough electricity to pump the crude.

El-Feel, also known as Elephant, is dependent on oil from Libya’s largest oil field, Sharara, to generate its power. Sharara isn’t operating because of a valve closure. So El-Feel and Sharara crude remain under force majeure, a legal status protecting a party from liability if it can’t fulfil a contract for reasons beyond its control.

El-Feel in western Libya is operated by a joint venture between Eni SpA and the state producer. It was due to reopen in December, but guards demanding benefits prevented that from happening, NOC said in January. Closed in April 2015, the field has an output capacity of 80,000 barrels a day, according to an NOC statement posted on the company’s website on April 16. Sharara pumped about 213,000 barrels a day before halting on April 9, a person familiar with the situation said last week.

Libyan Oil Output Said to Drop to Six-Month Low on Field Halt
A revival in Libya’s production will put pressure on the Organization of Petroleum Exporting Countries and other major producers that agreed last year to cut output to stem a glut and shore up prices. The North African nation, exempted from OPEC’s cuts because of its internal strife, was producing 490,000 barrels a day as of April 11, less than a third of the 1.6 million it pumped before a 2011 uprising.

Libya, with Africa’s largest oil reserves, is struggling to recover from years of conflict between rival governments and militias. It’s targeting production of about 1.2 million barrels by the end of 2017, Sanalla said on Dec. 21.