Libya to lose 800,000b/d as group threatens to shut down more oil fields 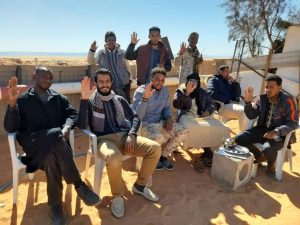 *Some members of the Fezzan Movement

Lagos — Libya stands to lose 800, 000 barrels of crude oil production per day as a group, Fezzan Anger threatens to shut down more oil fields in Libya.

The National Oil Corporation, NOC said the closure was ordered by eastern military commander Khalifa Haftar’s Libyan National Army, LNA and would lead to the loss of 800,000 barrels per day (bpd), more than half the country’s total production.

El Sharara has production of about 300,000 bpd and El Feel produces some 70,000 bpd. Both fields are controlled by groups aligned with the LNA.
The statement came just two days after ports and fields in the east was shut down.

The group had previously shut down Libya’s largest oilfield- if the threat becomes reality, has potentially taking nearly all the country’s oil output offline, according to a report by Reuters.

“We are now preparing and gathering to close Sharara and El Feel. So far we have not closed them,” Sheikh said.

Haftar’s LNA has been waging an offensive since April to capture the capital, Tripoli. It is one of two main factions that international powers want to agree to a ceasefire in Berlin on Sunday.

The move to close oil fields and ports is seen as a pressure tactic ahead of the summit, though the LNA has attempted to portray it as the result of popular pressure.

Eastern groups aligned with the LNA have long tried to gain control over oil exports and revenues, which are channeled through the central bank and the internationally recognized government in Tripoli.

The NOC has warned that any shutdowns could have a lasting impact.

“The oil and gas sector is the lifeblood of the Libyan economy and the single source of income for the Libyan people … They are not cards to be played to solve political matters,” NOC Chairman Mustafa Sanalla said on Friday.