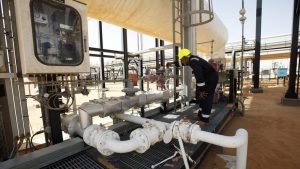 31 October 2018, News Wires — The chairman of Libya’s state oil firm National Oil Corp (NOC) has asked the central bank to increase salaries of oil workers by 67 percent in 2019, a statement said on Tuesday.

The North African country approved in 2013 such a pay rise which was never implemented as Libya’s chaos accelerated then with the country splitting in two government the following year and blockages and protests hampering production.

NOC Chairman Mustafa Sanalla “called for the implementation of a 67 percent salary increase for all oil workers as per the 2019 budget,” the oil company said in a statement.

He also called for the central bank, which manages Libya’s oil and gas revenues in the absence of a government and parliament with national reach, to make additional budget allocations for NOC to repair facilities.

Sanalla said the wage increase was justified based on the recent rise of oil production to 1.35 million barrels per day, the highest level since mid-2013 when a wave of protests and blockades by armed groups and staff kicked off.