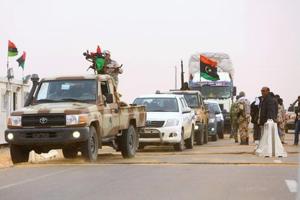 13 May 2014, News Wires – Libya’s western oilfields and pipelines could be set to reopen as soon as later on Monday evening after protesters announced an end to their blockade of key infrastructure, according to the National Oil Corporation, NOC.

The resumption would potentially raise Libyan output by 500,000 barrels per day (bpd).

NOC spokesman Mohamed al-Harari said that the major oil-producing fields of El Sharara, El Feel and Wafa, as well as the pipelines connecting them to the Zawiya port and the Mellitah condensates line, would all re-open within hours, Reuters reported.

“The protesters have announced that their blockade is over and all the lines in the west will reopen tonight,” he was quoted as saying.

The pipeline network in the west of Libya has been closed by protesters since March, forcing the shutdown of the oilfields, including the 340,000-bpd El Sharara.

A Libyan government deal to reopen major oil ports controlled by a separate rebel movement in the east of the North African country looks likely to unravel, however, over opposition to the appointment of a new Islamist-backed prime minister Ahmed Maiteeq.

The deal to reopen two of the four blocked ports was reached in early April. Since then, the smaller Hariga and Zueitina terminals have resumed oil exports, but the two larger ports of Ras Lanuf and Es Sider remain shut pending negotiations over the distribution of oil wealth.

Three years after the revolt that toppled Muammar Gaddafi, Libya’s oil infrastructure is a common target for protests, shutdowns and strikes by brigades of former rebels who refuse to disarm or recognise the state’s authority.

Oil and gas are the main source of national income and of the hard currency needed to fund essential food imports. Production was about 1.4 million bpd until mid-2013 when the protests began, reducing it to little more than 200,000 bpd.