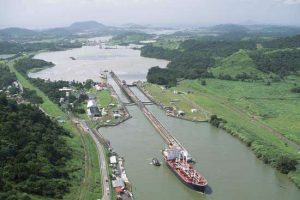 02 August 2018, News Wires —  Panama Canal registered the transit of its 4,000th Neopanamax vessel through the Expanded Canal on July 29, with the transit of the liquefied natural gas tanker Maria Energy from the Atlantic to the Pacific Ocean.

The Maria Energy was followed by another LNG tanker, the Maran Gas Alexandria, which also transited the neopanamax locks in the southbound direction.

The Panama Canal said in June that it will be lifting natural daylight restrictions for LNG transits on October 1, 2018, to offer added capacity to shippers.

Of the 4,000 vessels that have transited to date, roughly 52 percent have been from the container segment.

Liquefied petroleum gas (LPG) vessels constitute another 27 percent, and LNG carriers, a relatively new segment to the Panama Canal, have been responsible for 10 percent of traffic. Dry and liquid bulk carriers, car carriers and cruise ships make up the remaining transits.