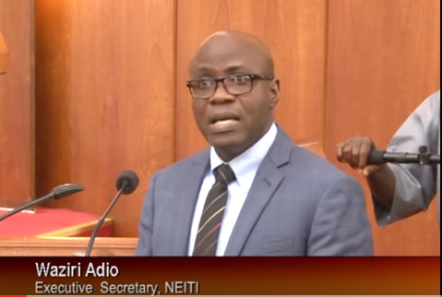 In a statement in Abuja, NEITI commended the NNPC for making public its 2018 Audited Financial Statements (AFS), while it described the publication of the accounts as laudable, especially as it was the first time in the history of the corporation that it was making its audited financial statement public.

It called on the NNPC to go further by publishing its previous audited accounts and in open data formats so that the reports can be more accessible to citizens who are the shareholders of the corporation, while it urged the NNPC to strengthen and sustain its commitment to data mainstreaming and systemic disclosure.

Speaking on the publication, Waziri Adio, Executive Secretary of NEITI, said: “We welcome the eventual fulfilment of this important pledge and obligation. Given NNPC’s antecedents and its prominent role in the sector and in the country, the publication of its audited accounts is positive, signaling more openness for the oil and gas sector and for Nigeria.

“When combined with the monthly reports that NNPC started publishing in 2016, this development marks a sea-change for a national oil company that used to be renowned for opacity.

“We urge NNPC to make this a routine practice and to mainstream transparency into all facets of its operations.

“We do not want to be the only entity talking about and practising transparency. There is little use being an island of transparency. Our goal is for all our stakeholders to believe in and model transparency. And to demonstrate our commitment to this new way of working, we are engaging with all covered entities bilaterally and collectively on outstanding issues and how we can further push the boundaries of openness.”

NEITI further stated that this historic development fulfilled a pledge made by the Group Managing Director of NNPC, Mallam Mele Kyari, to the management of NEITI at a meeting on 6th August 2019, a pledge which Kyari reiterated on 25th November 2019 during the official visit to Nigeria of Mr. Mark Robinson, the Executive Director of the global EITI.

According to the transparency agency, during the August 2019 advocacy meeting, the NEITI management had urged the then new GMD of NNPC to consider demonstrating his espoused commitment to transparency by making public the corporation’s audited accounts. Mr. Kyari acceded to the request on the spot.

NEITI further stated that it was working closely with the NNPC in this direction through a joint committee on remediation and mainstreaming, noting that the committee, set up by the two organisations, was tasked with the responsibilities of examining the status of legacy and other lingering issues about NNPC in NEITI’s reports over the years and to recommend workable strategies for resolving the issues.

According to NEITI, the committee was also charged to devise action plans on systematic disclosure of information on NNPC’s operations in an open and accessible format, as well as data mainstreaming, among others.

It added that the work of the NEITI-NNPC joint committee on addressing the remedial issues is already at an advanced stage and the report would be made public very soon.

NEITI stated that as part of its Strategic Plan and in line with the EITI Standard, it has of late embraced proactive and constructive engagements with entities covered under the its reports with a view to reducing audit issues, deepening commitment to transparency, and encouraging proactive disclosures.