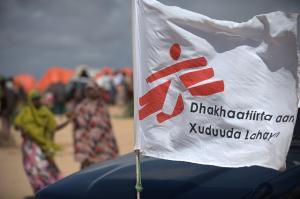 Over recent weeks, the threat of armed conflict has significantly disrupted the limited healthcare activities, referral systems and access to health facilities in and around Kismayo. In the feeding centre where the international medical organisation has been treating severely malnourished children since a nutritional crisis hit most of South Central Somalia in 2011, fear of the onset of fighting saw patient numbers drop dramatically, as staff negotiated discharge with parents wanting to flee or rejoin families.

Earlier today, MSF medical staff discharged 8 of the remaining 9 children at the request of their parents and provided supplies and instructions to try and help parents continue treatment at home. They were hoping to continue caring for one small boy considered too weak to be discharged, but staff reported that child too fled with his parents.

MSF opened the inpatient feeding centre for children too sick to be treated in an outpatient program during the 2011 nutritional crisis in response to high rates of malnutrition. “Since then MSF team has also responded to outbreaks of measles and of watery diarrhea – clear indications of the level of the vulnerability of the population and the health care needs,“ says David Querol, MSF’s Head of Mission, based in Nairobi.

The interruption of activities also leaves more than 650 children in the ambulatory nutritional programme in a similar very uncertain situation. In spite of the efforts done to provide them in the last week with a stock of supplementary therapeutic food, MSF remains concerned about their fate at this time.

‘Kismayo has very limited health services for its population and we fear a spread of violence could reduce these depleted services further.’ David Querol continues, ‘For example we are no longer able to refer patients to the nearby MSF hospital in Marere.’

In this context, MSF calls the belligerent parties to respect the already fragile health structures in and around Kismayo and ensure that the staff of these facilities can deliver the much needed assistance to the population. MSF also reminds all parties of their obligation to allow access to health care for all requiring emergency medical care.

MSF’s activities are based only on the medical needs of patients. The organization works to ensure assistance is delivered independently and neutrally from warring factions and parties without consideration of ethnicity, religion, clan or political affiliation.

MSF has been working in Somalia since 1991. Over the past year it has run up to 22 projects in different parts of the country and in refugee camps for Somalis in Ethiopia and Kenya. Throughout 2011 MSF treated over 78,500 patients for severe malnutrition and over 30,000 for moderate malnutrition; over 7,200 for measles and vaccinated 255,000 persons against the disease. MSF assisted in over 6,000 deliveries and provided over 537,500 consultations during the same period.