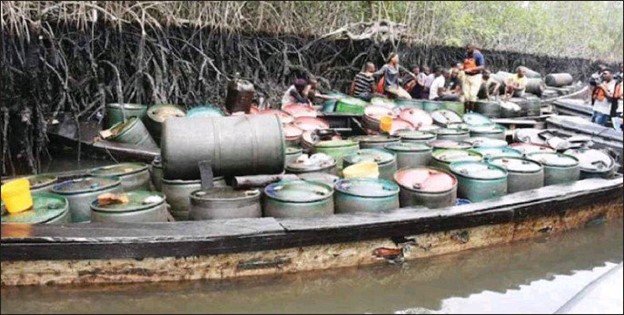 Port Harcourt — A middle age man, Mr Iyke Opara, whose house was razed due to activities of illegal oil bunkering, has accused the Nigeria Police of compromise in the investigation of the issues surrounding the fire that gutted his property.
Opara, specifically, accused Elele Police Division in Ikwerre Local Government Area, of Rivers State, of refusing to arrest a Police Sergeant, Basset Stanley, for involving in illegal bunkering, which led to the fire incident which razed his storey building and other properties in Elele.
Opara told the Human Rights Desk at the Police Headquarters in Port Harcourt, that the Police Sergeant runs an illegal oil bunkering syndicate in the area, and was converying the illegal products to Omoku, when the product gut fire on the road and spread into his compound, razing his property.
Opara alleged that before the incident, he had confronted the said Police Officer who owns the illegal bunkering business and his driver, not to ply the route where his (Opara) house was located.
“In September 2020, the vehicle conveying the illegal bunkering product owned by a Police Officer, Basset Stanley, serving in Mopol 48, Omoku in Ogba/Egbema/Ndoni LGA gut fire in front of my compound and later spread to my building and that of my uncle.
“The inferno razed my one storey building, detached six rooms as well as five 1-bedroom flats, with four lock up stores which belongs to my uncle, Mr Thompson Okoko.
“My 70 years old uncle, Thompson Okoko, died two months after the fire incident due to shock, as he could not fathom losing all his sweat in one day.”
The victim said when the incident occurred, he filed complaints at Elele Police Division, but five months after, nothing has been done by the Police, which prompted him to report the matter to Human Rights Desk, at the Rivers State Police headquarters, Port Harcourt.
He expressed concern that the said Police Officer still indulge himself in illegal bunkering activities even up till this moment.
He called on the New Commissioner of Police, CP Eboka Friday to ensure justice in the matter while calling on human rights organisations and the state Government to come to his aid.
Meanwhile, Human Rights Advocate, Prince Wiro, has charged the newly deployed Police Commissioner, Eboka Friday, to order a thorough and unbiased investigation into the allegation made by Mr. Opara against a serving Police Officer in the state.
Wiro, who is the Coordinator, Centre for Basic Rights Protection and Accountability Campaign, said considering the effects of illegal bunkering on the environment, the Police should expedite action in investigating Mr Opara’s claims and if the said Police Officer is found culpable, he should be dealt with in accordance to the law.