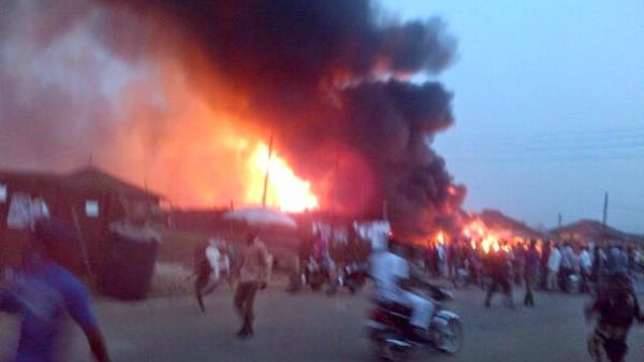 *Scene of the NCTL explosion.

02 March 2019, Sweetcrude, Port Harcourt — Twenty-four hours after a gas explosion rocked the Nembe Creek Truck Line, NCTL, belonging to Aiteo Eastern Exploration and Production Limited Company, causing panic across communities in Nembe Local Government Area of Bayelsa State, the fire is yet to be put out.

The NCTL is a 97km pipeline which transports over 150,000bpd to Bonny export terminal, was formally owned and operated by the Shell Petroleum Development Company Limited, SPDC, before it was divested to Aiteo in 2014, at the sum of $1.7billion.

According to indigenes of the community, the gas explosion occurred at about 4 am on Friday, near Oil Well 7 and has sacked indigenes of the affected communities, while many are reportedly missing including women and children.

An indigene of Nembe who spoke anonymously said oil leakages were previously detected on the pipeline, adding that the affected communities are Jalungo, Fatuo, Kalablomi, Nembe Creek I, II, and III communities, all in Nembe LGA.

He lamented that the gas explosion, since yesterday has polluted the air and water in the area, causing a halt to the livelihoods of members of the affected communities, which according to him, are peasant fishermen and women.

Meanwhile, the Nembe Council of Chiefs and Elders have threatened to drag the management of Aiteo Group before the National Assembly, while describing the explosion as massive destruction.

Spokesperson of the Council of Chiefs, Chief Nengi James-Eriworio, who called on Aiteo to be mindful of the welfare of indigenes of the host communities, said people have deserted the area and the company has refused to respond despite series of emergency calls.

“Up till this moment, the fire is still raging. The incident is uncalled for and questionable. The people are afraid. Women and children are missing.

“This is large scale explosion. We are calling on the Federal Government agencies to investigate and respond to salvage the people. The incident has caused air and water pollution. ”

However, the National Oil Spills Detection and Response Agency, NOSDRA, who confirmed the explosion, said the management of Aiteo was yet to officially report the incident to the agency.

NOSDRA Director in Bayelsa, Mr. Francis Umeh, told SweetCrude Reports exclusively that preparations are ongoing for the agency to visit the scene of the explosion.

“The incident has not been reported to us by Aiteo. We are making preparations to visit the scene. I cannot give you further details until we have visited the scene,” NOSDRA said.

Meanwhile, the management of Aiteo is yet to comment on the matter.