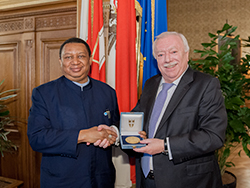 The Mayor welcomed the Secretary-General, congratulating him on his new role, and wished him a good stay in the city during his tenure as head of the 14-member Organization.

The Secretary-General expressed his deep appreciation to the Mayor for his hospitality, and for the good planning and services provided by the City of Vienna.