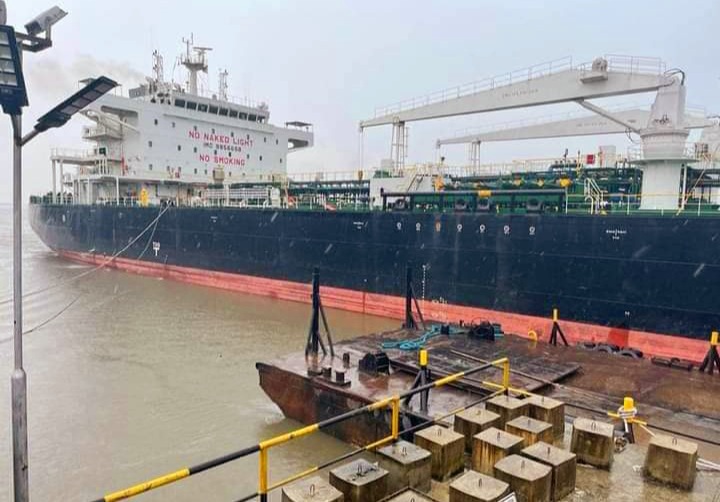 The vessel, MT African Marvel, which brought products to a private depot, Virgin Forest Energy Limited, now puts the State in the league of States with active maritime industry.

Speaking at the arrival of the vessel, the Chairman of Virgin Forest Energy Ltd., Mr. Johnson Chukwu, commended Governor Udom Emmanuel, for his support which culminated in the berthing of the vessel.

Chukwu said that with the development, residents of the State and those of neighbouring states can be assured of regular supply of petroleum products at affordable prices.

He also commended the Secretary to the State Government, Dr. Emmanuel Ekuwem and the Chairman, Akwa Ibom State Committee on Foreign Direct Investment, Mr. Gabriel Ukpeh for their support, which contributed to the success of the company’s investment in the State.

“Governor Udom Emmanuel has unflinchingly supported us in the arduous task of opening the channel, which took Virgin Forest Energy Limited and our partners in Ibaka-Oron Petroleum Depot Owners Association, more than six years to dredge the 14km Mbo River Channel from a draught of 3-4 metres to 9-10 metres.

“With the completion of the dredging of the Mbo River Channel and the successful arrival of MT African Marvel, Akwa Ibom has now effectively joined states like Lagos, Rivers, Cross River and Delta as one with an active Maritime industry.

“Residents of the State and those of neighbouring states can be assured of regular supply of petroleum products at affordable prices.”

The event was witnessed by the Managing Director of Virgin Forest Energy Limited, Mrs
Nneoma Chukwu, and representatives of all the industry regulators including the Zonal Controller of Department of Petroleum Resources, Mr. Ineh Goddey.