This has resulted in low liquefaction capacity utilization. The cascading impact of global LNG supply overhang coupled with reduced demand may lead companies to withhold or delay their capital spends on upcoming multi-billion-dollar gas projects, says GlobalData, a leading data and analytics company.

Haseeb Ahmed, Oil and Gas analyst at Global Data, comments: “Amid weakening demand and falling oil and gas prices, capex spends on LNG projects in the MENA region are likely to be deferred during the period 2020-2025. This is likely to cause delayed commencement of operations of capital intensive projects in the region. Although the duration of these disruptions is uncertain, the capex guidance would likely remain undeterred in the longer term to meet future LNG demand.” 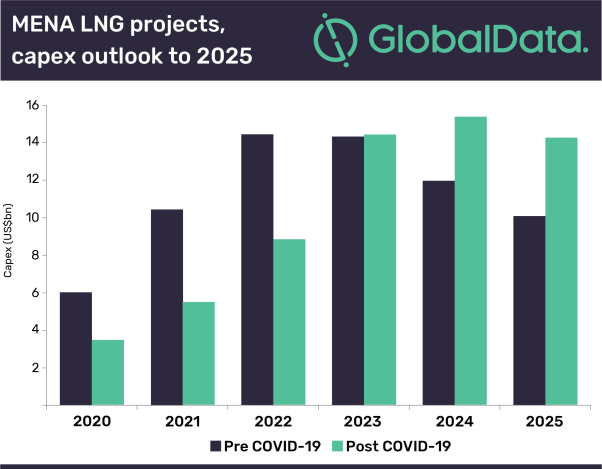 The bidding process of Qatar Petroleum’s Ras Laffan–North Field Expansion project was hampered, leading to the delay in start year by a few months. The financial investment decision (FID) of the project, which was expected to be in 2020, is also likely to be pushed to 2021. Similarly, the start of the Rovuma LNG project, operated by Mozambique Rovuma Venture SpA, is likely to be delayed by a year, as the current crisis has deferred its FID by a year.

Even active terminals are being confronted with challenges induced by COVID-19. The Egyptian LNG terminal has suspended its work till mid-July 2020 given the current market conditions, while the deal among its shareholders – ENI, Naturgy (Union Fenosa’s owners), the Egyptian government, and EGAS, to revive Damietta LNG terminal, fell through.

Ahmed concludes: “While the depressed financial market can prove challenging for LNG companies to find new investors to fund their projects, LNG buyers and suppliers would contemplate strategy revisions to remain competitive in the mid-term. Possible economic recovery coupled with favorable gas policies in the long-term can drive natural gas demand growth in the region; Integrated gas projects, already announced, will be developed.”