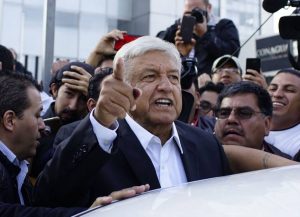 09 September 2018, Villahermosa, Mexico — Mexican President-elect Andres Manuel Lopez Obrador said on Saturday that crude production in the country is expected to reach at least 2.6 million barrels per day (bpd) by the end of his administration, up from current levels of 1.8 million bpd.

“The public investment will be dedicated to extracting petroleum in Pemex’s territory,” he said. “Those platforms that are not being occupied will have work again.”

Lopez Obrador said earlier this week that the tenders will begin in December but did not provide further details.

To boost production, Pemex will need to strike agreements with companies it has traditionally partnered with to begin drilling or tap existing wells, said Lopez Obrador.

Pemex’s production has hit its lowest level in decades, with its six refineries operating at just 40 percent capacity, increasing the need for fuel imports.

Lopez Obrador, who takes office in December, has long criticized the outgoing government’s move to open the oil industry to private capital.