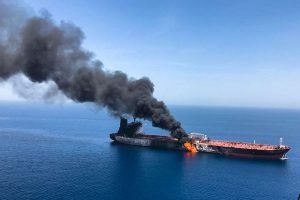 Oil tanker attack in the Gulf of Oman

News Wires — Oil prices surged early on Thursday after two oil tankers were reported to have been hit by explosions in the Gulf of Oman between Iran and the United Arab Emirates (UAE), a month after a previous incident in Middle Eastern waters.

As of 09:35 a.m. EDT on Thursday, WTI Crude was surging 3.17% at $52.76, while Brent Crude was soaring 3.42% at $62.02, as renewed tension in the Middle East has the market worried that oil supply along the world’s most important chokepoints in the region may be under threat.

The suspected attacks occurred one month after the UAE said in May that a total four vesselswere attacked off its coast at the port of Fujairah, the world’s second-largest bunkering port.

In today’s incidents, a Marshall Island flagged tanker, the Front Altair, was attacked between the Emirates and Iran in the early morning local time, the Norwegian Maritime Authority said, adding “There were reportedly three detonations on board the ship. The crew have been rescued by a passing ship and no injuries are reported.”

The Front Altair ship is on fire, while a second tanker, the Kokuka Courageous, has reportedly also been attacked in the same area, the Norwegian authority said.

“Based on today’s incidents, even though the background for the attacks is not completely clear, the Norwegian Maritime Authority advices all ships to keep a safe distance from Iranian waters,” it added.

Iran said that it rescued the crew members on board the two tankers, the BBC reports, and quotes an Iranian official as saying that “Iran has no connection with the incident.”