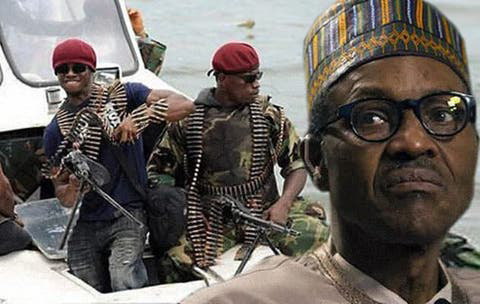 *President Muhammadu Buhari and some Niger Delta militants in the background

To this end, the group has also charged all Niger Delta State Governors to give account of the alleged N44.68trillion of 13percent derivation allocation from 1999 to 2018.

Commanding Officer of RNDA, Gen. Johnmark Ezon-Ebi, said the financial records available to him indicates that between 2018 and 2021, the 13percent derivation funds collected by Governors in the region was over N55trillion.

Ezon-Ebi regretted that Niger Delta State Governors have collected so much funds, from the internally generated revenue and monthly Federal allocations, excluding funds from Excess Crude, Paris Club bailout funds, monthly security votes and other funds, with no commensurate development in the region.

The group accused governors in the region of abandoning and neglecting the development of oil producing communities, thereby causing youths in the region to be restive.

“RNDA, the coalition of militant groups agitating for the overall development of the Niger Delta, most especially for the betterment of the oil and gas producing communities in the creeks, has challenged governors of the Niger Delta to give proper account of over N55trillion they have collected so far from the Federation Account on 13 percent derivation from 1999 to 2021.

“The amount is without the IGRs and monthly allocations from the Federation Account. From 1999 to 2018, according to financial records obtained by us, the Niger Delta oil-producing states have received over N44.68 trillion and from 2018 to 2021 they have collected over N50 trillion.

“Despite that South South oil producing governors are of the opposition party, the Peoples Democratic Party, President Muhammadu Buhari of the All Progressives Congress, has never denied them the 13percent derivation funds monthly.

“The President also has never denied them even the Paris Club bailout funds. They were given to them in billions of Naira for two consecutive times, yet these South South six oil producing states’ debt profile is huge and running into over N1.25 trillion.”