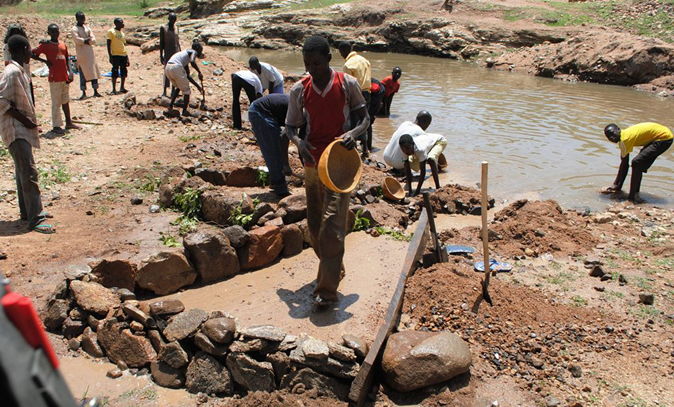 02 January 2017, Sweetcrude, Abuja- The Miners Association of Nigeria, MAN, has criticised the plan by the Federal Government to commence the gold purchase scheme, noting that although the scheme appeared laudable, it might not last if critical stakeholders like the association were not carried along.

MAN’s President, Alhaji Sani Shehu, disclosed this while briefing journalists on the state of mining in Nigeria at the association’s end of the year 2017 press conference in Abuja.

“The scheme, therefore, may not last long if critical stakeholders such as MAN were sidelined given the closeness of MAN to ASMs”.

The miners’ president maintained that the establishment of the National Council on Mining and Mineral Resources Development was a step in the right direction, especially as will carry along the state governments on the happenings in the sector through periodic briefings by the ministry.

This is even as he lamented that, unlike other ministries, the stakeholders for the Council on Mining and Mineral Resources Development were not clearly defined.

He noted that apart from commissioners in charge of mining-related ministries in the states, other stakeholders should be clearly defined.

He also expressed pleasure on the ASM Loan Intervention saying: “We consider the N5 billion loan facility given by the ministry to BoI for management as a welcome development. We believe it will serve as a catalyst to solving the funding challenges of the ASM.

“However, about five months after the presentation of a dummy cheque and advert made, no single miner has been able to access the loan as conditionalities are largely commercial, which contradicts the social concern attached to the objective of the loan.

“The government should, therefore, be interested at the level of disbursement over a given period to ensure that the philosophy behind such intervention is not derailed”.

Alhaji Shehu also commended the government for clamping down on illegal mining activities in different parts of the country, especially in Zurak, Plateau State, and Majo Sina in Taraba State.