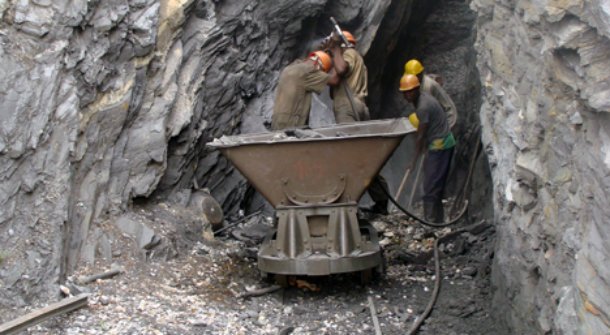 *Says Gold Purchase Scheme to fail without input by miners

29 December 2017, Sweetcrude, Abuja – The Miners Association of Nigeria (MAN) have strongly opposed the removal of mining from the exclusive lists of the Federal government to allow more states participation.

MAN’s President, Alhaji Sani Shehu stated the position of the Association while briefing journalists on the state of mining in Nigeria at the Association’s End of the Year 2017 Press Conference in Abuja yesterday.

He said, “The recent suggestion from the Ministry of Mines and Steel Development on the removal of mining from the exclusive legislative list to concurrent list in order to allow states play more prominent roles in mining issues in the country is strongly opposed by MAN.

“It is our belief that state concerns can be addressed by the instrumentality of the recently inaugurated Mining Council and the MIREMCO provisions in the Mining Act in order to avert any constitutional crisis that may likely arise as a result of any suggestion or proposal to remove mining from the exclusive legislative list.”

According to him, “The dispute over the ownership of a mining site in Edo State between the above two giant firms is of concern to us in the Association. While noting that the ideal position would have been to await the verdict of the court.

“The current press wars between the two is taking an unpleasant dimension which will not go well for the growth of the mining industry in Nigeria which may also have a multiplier effect on our national socio-economic life.

“We therefore strongly appeal to all critical stakeholders including Manufacturers Association of Nigeria, Nigeria Economic Summit Group (NESG), etc. to help broker a peace agreement between these industrial giants in the national interest of industrial harmony in the country.”

According to Alhaji Shehu, ”we feel that the Gold Purchase Scheme was structured in secrecy as stakeholders were not carried along during its formation. The scheme, therefore, may not last long if critical stakeholders such as MAN were sidelined given the closeness of MAN to ASMs.

The Miners President maintained that the National Council on Mining and Mineral Resources Development is a step in the right direction especially to carry along the state governments on the happenings in the sector through periodic briefings by the ministry.

This is even as he lamented that, unlike other ministries, the stakeholders for the Council on Mining & Mineral Resources Development are not clearly defined. Apart from Commissioners in charge of mining-related ministries in the states, other stakeholders should be clearly stated.

He also expressed pleasure on the ASM Loan Intervention saying, “We consider the N5 billion loan facility given by the ministry to BoI for management as a welcome development. We believe it will serve as a catalyst to solving the funding challenges of the ASM.

“However, about 5 months after the presentation of a dummy cheque and advert made, no single miner has been able to access the loan as conditionalities are largely commercial, which contradicts the social concern attached to the objective of the loan.

“The Government should, therefore, be interested at the level of disbursement over a given period to ensure that the philosophy behind such intervention is not derailed.

The Miners President also commended the government for clamping down on illegal mining activities in different parts of the country, especially in Zurak, Plateau State and Majo Sina in Taraba State.

He also commended the Ministry for Launching it’s Web Portal and urged them to form a standing committee to appraise applications and make recommendations to the Hon. Minister for his necessary action in relation to waiver on import duty of mining equipment machines.

Alhaji Shehu also appealed to the Government to urgently constitute COMEG Council to be able to perform its statutory functions effectively.

He said, “We applaud the various initiatives of the ministry towards reforming the sector. However, we believe that if the observations and suggestions made in this presentation are duly considered, it will help to accelerate the process for quicker results so that the mining sector will regain its previous role of creating massive job opportunities for the people and contributing favourably to the country’s GDP.”