Lagos — The transition towards low-carbon economies has gained a strong momentum in recent energy debates, particularly with the announcements by several countries, including the EU Member States, the UK, Japan and South Korea, to shift their energy systems towards net-zero emissions by 2050 and China by 2060. This dynamic has raised the opportunity for developing scenario-based analyses to enable a better understanding of the potential decarbonisation pathways and their impact on future energy systems.

The GECF Secretariat is part of this debate and strives to bring its views, through scenario analysis, on the future decarbonisation trajectories, and the role of natural gas in the energy transitions. In its 5th edition of the Global Gas Outlook 2050, a Carbon Mitigation Scenario (CMS) has been developed to investigate the potential of reducing energy-related emissions with larger penetration of natural gas. In this context, this expert commentary aims to outline key insights from the development of the CMS and position this scenario with benchmarked scenarios, published recently by other forecasting organisations.

We begin by distinguishing between two main approaches adopted by forecasting organisations for defining and analysing alternative scenarios for carbon mitigation. A first approach can be categorised as a future-backward (or future-back) analysis (1)(2), generally used in scenarios considering net-zero emissions (e.g., IEA NZE2050, BP net-zero) (3)(4). These scenarios define the future  targets such as, reaching net-zero emissions by 2050 and the prospects for possible energy pathways that might drive the world towards these targets.

Nevertheless, many of these target-seeking scenarios rely on options and disruptive technologies, which are yet to be proven. The large-scale deployment of these technologies is hampered by economic and technical issues, especially in developing countries. It is  estimated that around half of the  reductions required to achieve net-zero targets will come from technologies that are not currently available in the market (5).

Besides the future-backward scenarios, another set of scenarios, can be categorised as using a future-forward approach (1)(2). These scenarios rely on assessing feasible and conceivable futures for energy and carbon emissions, based on the present forces that drive an accelerated energy transition. Their assumptions are primarily built by taking into account policy pledges and orientations, the concrete actions and instruments implemented in the framework of these policies, the technology trends, and the barriers that countries might face in deploying different types of carbon mitigation options and technologies.

Under this category, we can include recently published scenarios such as McKinsey Accelerated Transition Scenario (6) or the Equinor Reform Scenario (7). Both of these scenarios capture where the world could be headed while considering policy momentum that are enabling further carbon mitigation compared to the Reference case. The GECF CMS is part of this future-forward category, focusing its attention on certain key options and technologies that could substantially reduce emissions.

The GECF Carbon Mitigation Scenario: exploring the uncertainties and the role of natural gas in mitigating carbon emissions

The GECF CMS analyses four major shifts that will shape an accelerated energy transition compared to the Reference case (8), and reflect key uncertainties affecting future emissions and energy prospects. These changes are:

1) Low carbon-intensive power generation: To  reduce power intensity compared to the Reference case, the CMS assumes  a larger expansion of gas-fired capacities, further substituting coal and oil-based ones. It also considers further penetration of intermittent renewables, solar and wind in particular. This deployment of gas and renewables is encouraged by the implementation of higher carbon prices, strengthened emissions standards, and renewable support schemes. Gas also benefits from the emergence of small-scale LNG for power projects and its flexibility advantage as a complement to renewables.

2) Electrification and fuels switching: It captures greater electrification in residential and commercial buildings and industrial activities. It also considers more fuel switching, prompting a bigger share of gas at the expense of coal and oil products in these two sectors.

4) Clean road mobility: It considers more uptake of green vehicles, focusing particularly on the electric vehicles (EVs), in addition to natural gas vehicles (NGVs) and hydrogen fuel cells in the road transport sector. EVs are assumed to represent 45% of new sales by 2050 -one-third are estimated in the Reference case. NGVs are also assumed to achieve progress mainly in heavy goods transport. They will benefit from the economic and environmental advantages in the context of strengthened clean air policies adopted by countries. Moreover, the development of gas infrastructure will lend vital support to the NGVs.

Overall, the CMS particularly focuses on existing and well-established technologies, which are assumed to be largely disseminated with the implementation of strengthened carbon mitigation policies. It also assesses the positioning of natural gas in the context of the four shifts previousely highlighted.

Figure 1.1 (below) highlights the future energy-related emissions profiles in the GECF Reference case and CMS, and compares them to the other alternative pathways projected by McKinsey Accelerated Transition and Equinor Reform scenarios.

In the GECF Reference case, energy-related emissions are forecasted to experience a slight increase, after their short-term post-COVID 19 recovery, before plateauing between 2030 and 2050 within a range of 33.7-33.8 giggatonnes (Gt) of CO2. In the CMS, the combination of the four afore-mentioned major shifts will reduce emissions by around 6.8 GtCO2, or 20% compared to the Reference case. 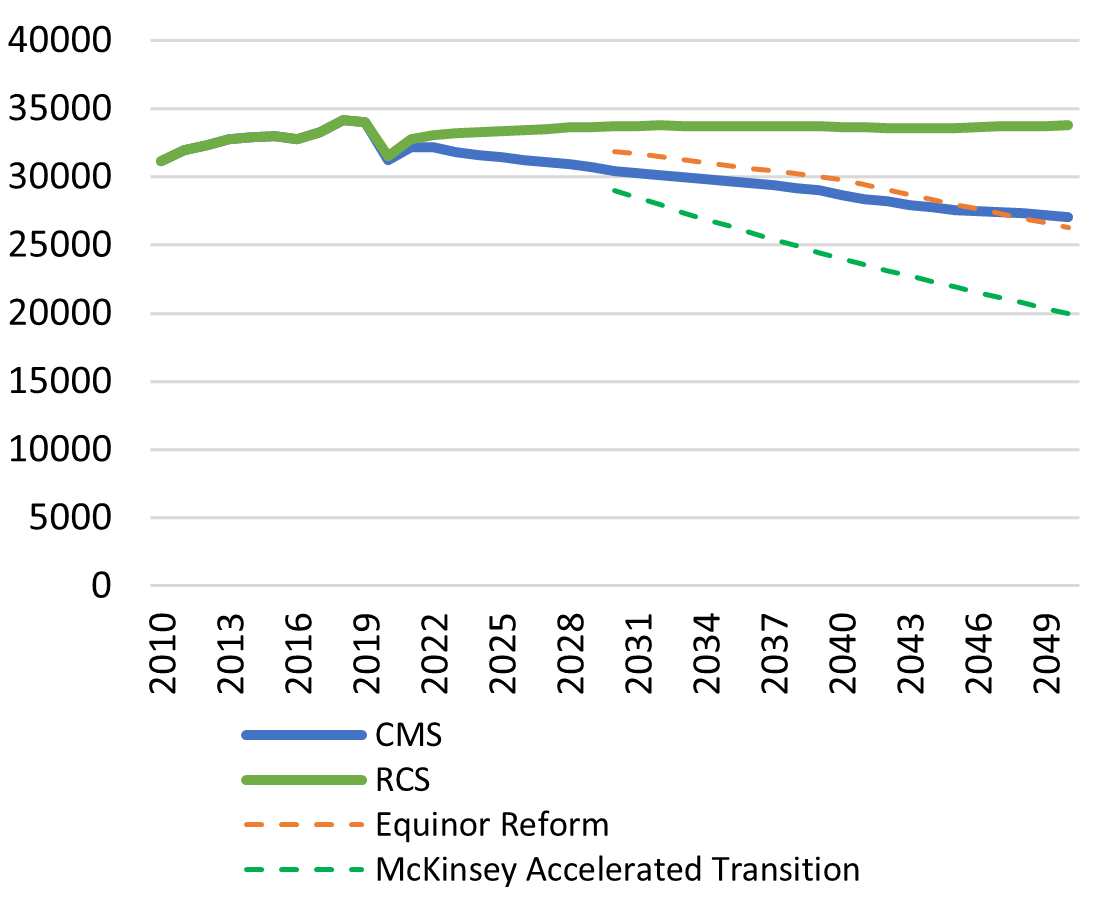 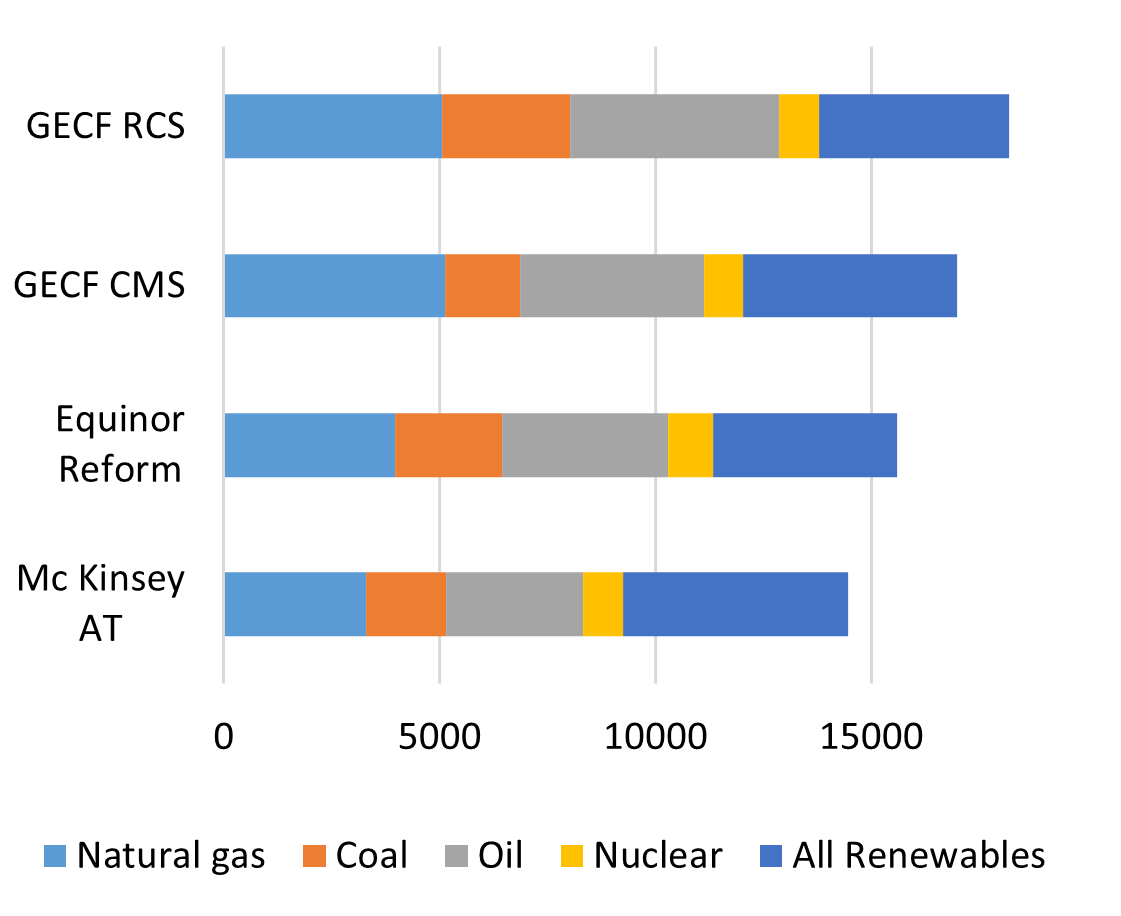 If we benchmark the GECF CMS with the other considered scenarios, we see that it exhibits a long-term emissions pathway closely similar to the Equinor Reform Scenario. The two scenarios anticipate hydrocarbon shares to reach around two-thirds of the 2050 primary energy mix, although the Equinor Reform foresees primary demand to be 8% lower than in the GECF CMS. A key difference between them, however, is in the level of gas penetration. The CMS anticipates gas demand share to reach 30% by 2050, compared to 23% in Equinor Reform. Demand for coal and oil is expected to substantially weaken in both the scenarios with a much more aggressive decline assumed in the CMS for coal. Indeed, coal demand in 2050 will reach nearly 1,700 million tonnes of oil equivalent (mtoe), which is much less than the 2,500 mtoe estimated by Equinor Reform.

The McKinsey Accelerated Transition scenario, which anticipates emissions to reach 20 GtCO2 by 2050;40% less than the GECF Reference case forecasts, is more pessimistic in terms of hydrocarbons prospects. To it, hydrocarbons will represent less than 60% of the primary energy by 2050. In this scenario, gas and oil are set at lower levels when comparing to the other benchmarked scenarios. In particular, natural gas is estimated to reach 3,840 billion cubic metres (bcm), which is 25% lower than what the GECF forecasts in the Reference case. Renewables,including hydro and biomass, are set to make a big step in the McKinsey Accelerated Transition scenario reaching more than 35% of the primary mix, in comparison to 27% for Equinor Reform and 29% for the GECF CMS.
It is worth mentioning that the extent of displacement of coal and oil by natural gas and renewables, together with anticipated differences in the global energy demand, are instrumental in shaping the variations between the benchmarked scenarios.

Emissions abatement and the role of natural gas in different sectors
The sectoral breakdown of the emissions abatement in the GECF CMS indicates that power generation represents almost 60% of the reduction potential in 2050 (Figure 1.2 left). The uptake of intermittent renewables and gas-fired capacities, on the back of significant decline of coal for power is instrumental in causing this decrease. By 2050, renewables-led power generation will rise by around one-third in the CMS, while coal generation will shrink by almost 60%. Gas demand will add almost 50 bcm, or nearly 2% to the Reference Case (Figure 1.2 right). This relatively slight increase of gas in power demand reflects the lower utilisation rates of the gas-fired capacities, due to their growing role as complements to the rising share of renewables in the sector.

2050 emissions abatement by sectors (left) (MtCO2), and incremental gas demand (right) (bcm) in the CMS compared to the Reference case 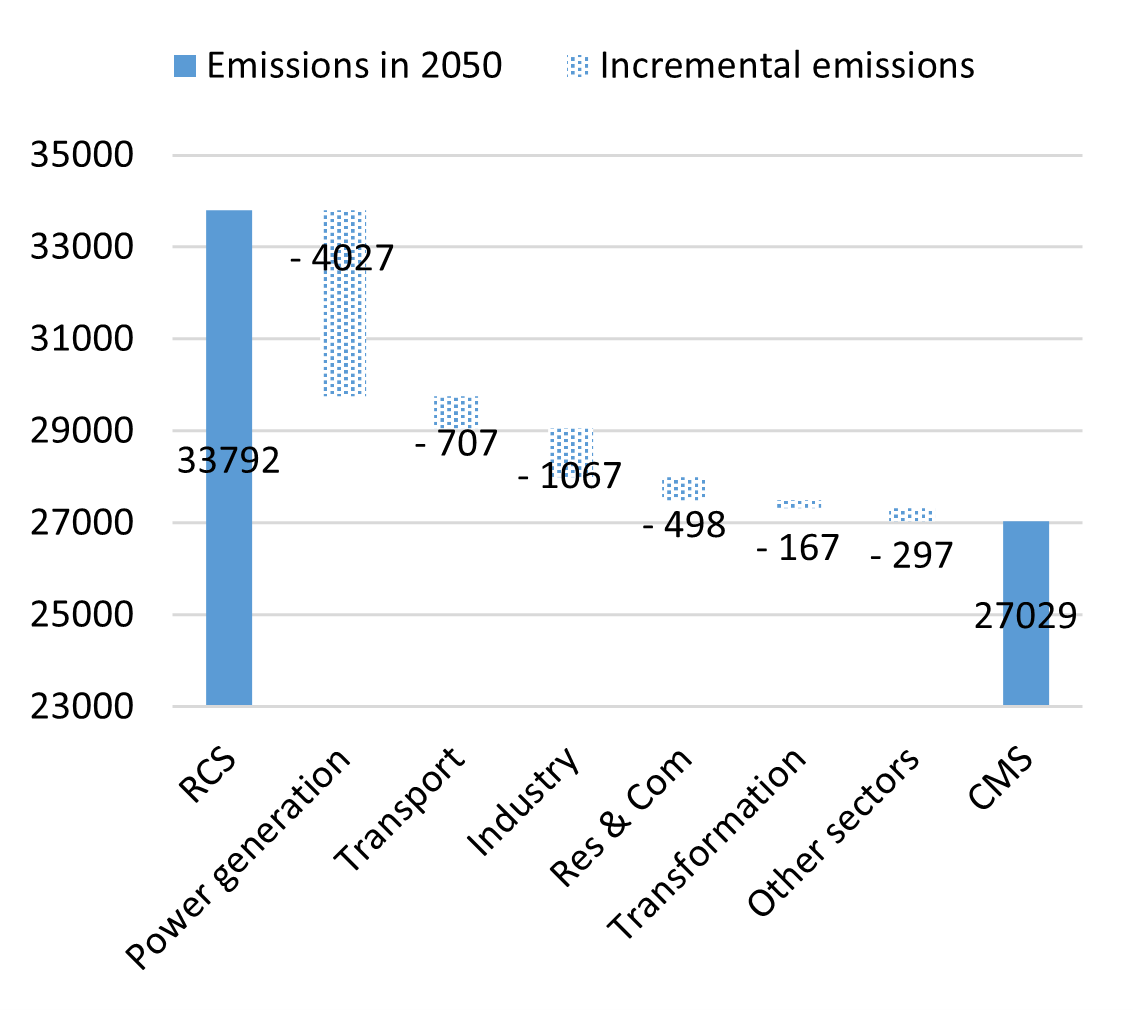 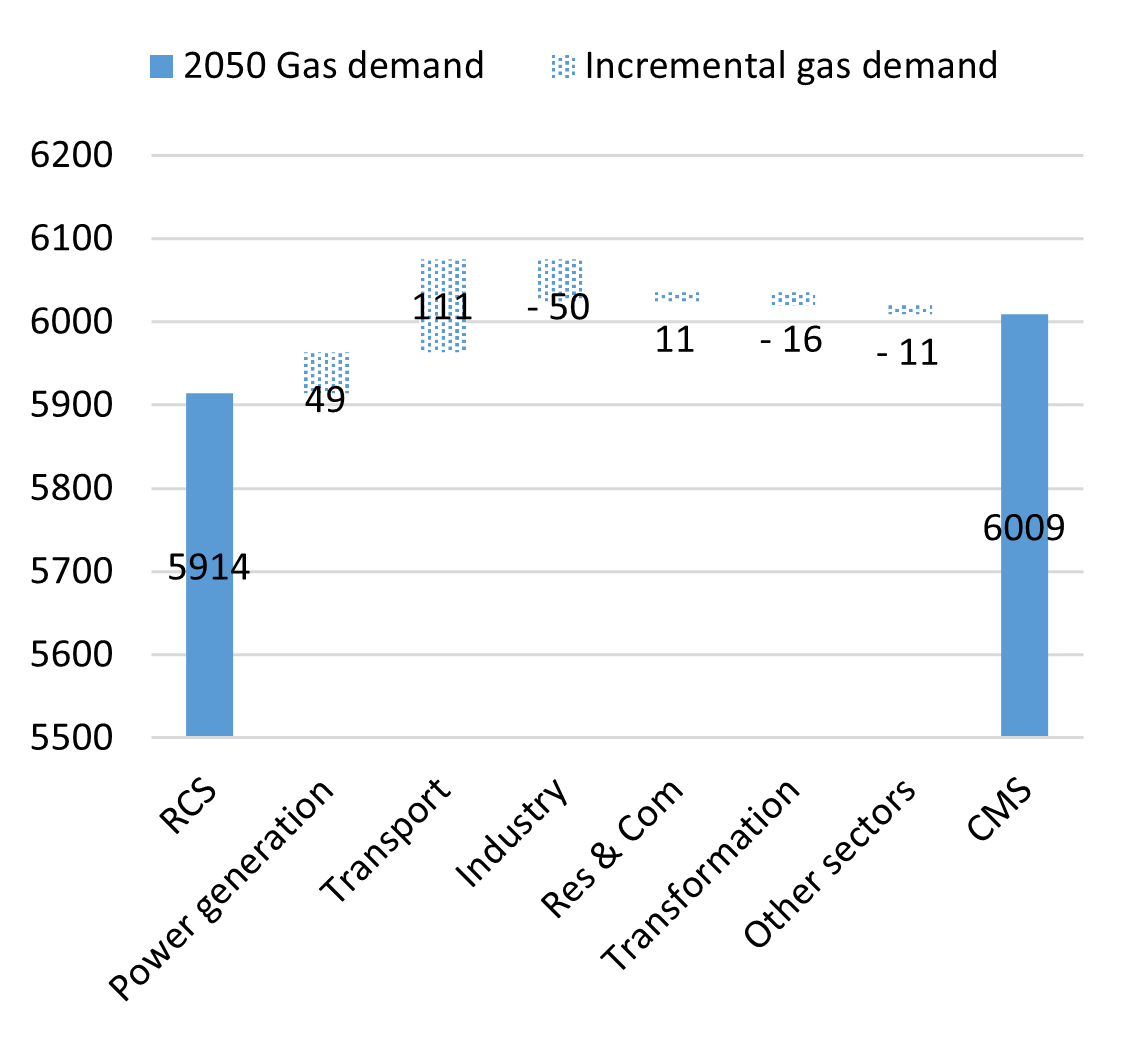 The industrial sector offers the second highest potential of emissions reduction, driven by the significant improvements in energy efficiency, recycling of materials; especially in the steel industry, and larger electrification of processes, including in the non-energy intensive manufacturing industries. Although the CMS considers larger switching from coal to gas in industrial sectors, this upside effect on gas demand is counterbalanced by efficiency improvements and electrification. Indeed, they will contribute to a decrease of demand by around 50 bcm globally.

The potential of additional gas in residential and commercial sectors is estimated at around 10 bcm. This increase results from the interplay between two opposing effects on gas demand: an upside effect due to the switching from coal and oil products in cooking and heating services and a downside effect due to electrification and efficiency improvements in buildings and appliances.

Finally, the transformation and other sectors,including the own use of the energy sector, will reduce their emissions by almost 460 MtCO2. This reduction is mainly due to the decrease in oil and coal outputs, underpinned by the decreasing demand for these fuels. The gas self-consumption of the transformation and energy industries will be globally reduced by 30 bcm in the CMS. Within the transformation industries, the gas-based hydrogen conversion will add almost 12 bcm to the Reference case, which is driven by the uptake of hydrogen utilisation in the transport sector. In order to achieve bigger progress, hydrogen technologies need to overcome several technical and economic barriers, for enabling their deployment at a large scale.

Conclusion
In conclusion, the role of natural gas in tackling emissions is seen very differently between various energy scenarios investigating carbon mitigation pathways. The GECF’sCMSanalyses the possibilities of reducing emissions by enabling larger penetration of gas. This can be achieved through considering enhanced coal and oil to gas substitutions and more synergies and complementarities between gas and renewables.
The CMS demonstrates the possibility to reduce emissions by more than 20%, building on larger dissemination of well-established technologies, including the gas-based ones. It indicates that further gas expansion can be reached , particularly in the transport and power generation sectors, driving an increase of the 2050 gas share from 28% in the Reference case to 30% in the CMS.

However, the CMS notes that some key future evolutions might challenge this expected gas expansion. These include the lower utilisation rates of gas-based power plants due to their increasing role for balancing renewables, electrification and efficiency improvements in buildings and industries, and penetration of EVs.

To tap the further potential of gas-based emissions mitigation and improve the environmental credits of natural gas, there is a real need for the gas actors to scale up the decarbonisation options through carbon capture, utilization and storage (CCUS), gas-based hydrogen, and the implementation of carbon offsetting mechanisms. The GECF Member Countries have already started their decarbonisation effort, particularly through key projects implemented by national oil and gas companies (e.g. projects to capture and store CO2 in Qatar, Algeria and Norway). Furthermore, countries such as Russia, Trinidad and Tobago, and the UAE have launched initiatives to support hydrogen development. Russia in particular has announced a strategy to export 2 million tonnes of hydrogen by 2035.

The GECF Secretariat is striving to support these efforts by facilitating cooperation and knowledge-sharing between the GECF Member Countries. It has recently launched the Environmental Knowledge and Solutions (EKS) initiative, setting a framework for this environmental cooperation. The EKS proposes a set of actions aimed at reinforcing the environmental advantages of natural gas and promoting its role in the future decarbonisation agenda. This effort is in line with the spirit of the GECF platform, reflected particularly in the 2019 Declaration of Malabo (9). The latter emphasised the value of cooperation in supporting natural gas as an indispensable contributor to protecting the environment, and mitigating and adapting to the effects of the climate change. 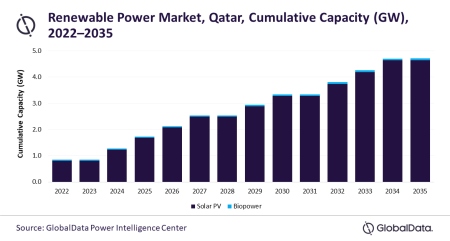