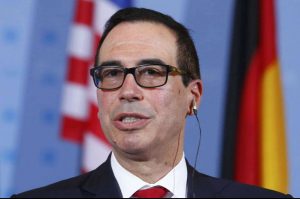 22 October 2018, News Wires —  U.S. Treasury Secretary Steven Mnuchin said on Sunday it will be harder for countries to get waivers on Iran oil sanctions than during the Obama administration and dismissed concerns that oil prices could rise, saying the market had already factored in the losses.

In an interview with Reuters in Jerusalem at the start of a Middle East trip, Mnuchin said countries would have to reduce their purchases of Iranian oil by more than the roughly 20 percent level they did from 2013 to 2015 to get waivers.

“I would expect that if we do give waivers it will be significantly larger reductions,” said Mnuchin.

He added: “Oil prices have already gone up, so my expectation is that the oil market has anticipated what’s going on in the reductions. I believe the information is already reflected in the price of oil,” he said.

His comments come two weeks before the Trump administration reimposes oil and financial sanctions against Iran after President Donald Trump withdrew from a 2015 deal between Iran and six world powers, which aimed to prevent Tehran from developing nuclear weapons.

Iran’s oil exports could fall by as much as two-thirds due to the sanctions, straining oil markets.

Mnuchin was adamant that countries would eventually have to cut imports to nil.

His comments come as the administration actively considers waivers on sanctions it will reimpose for countries that are reducing their imports of Iranian oil.

The administration withdrew from a deal over Tehran’s nuclear program in May and is unilaterally reimposing sanctions on Iran’s crude oil consumers after Nov. 4.

The sanctions aim to force Tehran to stop its involvement in regional conflicts in Syria, Yemen and Iraq and halt its ballistic missile program.

Iran says it has abided by the 2015 nuclear deal, which was struck with five other world powers, besides the United States.

While Iran believes that it can ward off severe economic damages from the U.S. sanctions for the remainder of Trump’s term, Mnuchin predicted a significant impact on its economy as major companies exit the Iranian market for fear of U.S. reprisals.

“We have already begun to see the impact and my expectation is we will see a significantly larger impact once the sanctions go into place,” he said, “The economic squeeze will be very big over the next two years.”

Mnuchin said the U.S. Treasury was in negotiations with Belgian-based financial messaging service SWIFT, that facilitates the bulk of the world’s cross-border money transactions, on disconnecting Iran from the network.

Washington has been pressuring SWIFT to cut Iran from the system as it did in 2012 before the nuclear deal.

Although the United States does not hold a majority on SWIFT’s board of directors, the Trump administration could impose penalties on SWIFT unless it disconnects from Iran.

Mnuchin declined to give details of the talks with SWIFT executives.

He said, however, that the Treasury Department would identify “as quickly as possible” banks that would be allowed to process transactions for humanitarian funding to Iran.

“We want to get to the right outcome, which is cutting off transactions,” he said, declining to comment on which banks would be selected.

Germany’s Foreign Minister Heiko Maas called in August for a SWIFT-style system independent of Washington that would possibly keep the nuclear agreement with Iran alive.