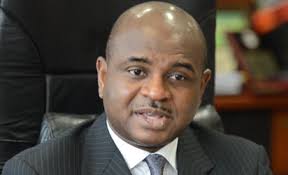 08 November 2018, Sweetcrude, Port Harcourt — The presidential candidate of the Young Progressives Party, Professor Kingsley Moghalu, says it is illegal for the Nigerian National Petroleum Corporation, NNPC, to divert the dividends from the country’s investment in the Nigerian Liquified Natural Gas, NLNG, into the payment of petrol subsidy.

Moghalu said by law, dividends from the nation’s 49percent equity stake in NLNG should be paid into the Consolidated Revenue Fund of the federation, where the money would be shared by the three tiers of government.

The former Deputy Governor of the Central Bank of Nigeria, in a statement by his Spokesman, Mr. Jide Akintunde, explained that the Federal Government is also required by law to secure budgetary approval from the National Assembly to fund its fiscal commitments, including petrol subsidy.

Moghalu, who accused the president Buhari-led administration of corruption and lack of transparency, wondered why the Federal Government was still paying fuel subsidy after increasing the pump price of fuel from N85 to N145 per litre.

According to him, “Instead of obeying the relevant laws, the administration of President Muhammadu Buhari, through the NNPC, has been breaking the law by secretly diverting NLNG dividends to pay for petrol subsidy that was not budgeted for.

“According to various media reports, the Group Managing Director of NNPC, Maikanti Baru, last week, told the Senate ad-hoc committee investigating alleged $3.5 billion account kept by NNPC for petrol subsidy that only $1.05 billion has been taken from the NLNG dividends fund to defray the cost of “under-recovery” in the importation of fuel.

“The illegal payment of fuel subsidy shows the President Buhari administration is not transparent. His government is also deceitful and acting contrary to its claims of fighting corruption.

“The continuation of petrol subsidy secretly after a 67 percent increase in the pump price of petrol by Buhari shows incompetence in economic management and political will to reform the petroleum industry.”

The presidential hopeful further stated that the sums diverted to the fuel subsidy scam could accomplish much in education, human capital development, and police reform.

He promised to abolish the fuel subsidy in 2019 if elected president.

“As President, I plan to deregulate the downstream petroleum sector, and partially privatize the NNPC to make it a transparent corporation.

“The oil-producing communities will have a significant ownership stake in the shares of NNPC, when privatised, in line with my vision for the constitutional restructuring of the country and fiscal federalism, where all Nigerian regions will own the natural resources in their area and pay tax to the federal government.”