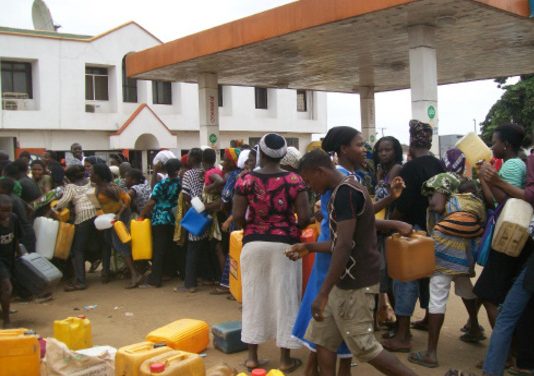 Port Harcourt — The Movement for the Survival of Izon Ethnic Nationality in the Niger Delta, has cautioned civil society organization’s and those planning a nationwide protest against the raging fuel scarcity in the country, to sheathe their sword and tow the path of peace.

National Vice President of MOSIEND, Mr Thompson Fuoye, advised civil society groups to constructively engage the authorities, explaining that protest at this time of the nation where political activities are heightened was unnecessary, and would only compound the hardship in the country.

Fuoye who said discreet findings by MOSIEND revealed that the NNPC was culpable in the importation of contaminated fuel due to negligence, however, called for understanding, explaining that NNPC was doing all within its powers to see that the ongoing fuel scarcity was resolved.

He maintained that the group has resolved not to be part of the planned protest but rather to support and propel the NNPC to do the right thing to end the fuel scarcity.

“Whereas we condemned the fact that the contaminated fuel came into the country due to negligence by NNPC. MOSIEND in due diligence in trying to find out the cause was angry with the NNPC.

“It is clear that at this time in our nation where things are tough and harsh in the country, it will be quite unnecessary to allow protest to hit the country.

“Definitely for every protest that you make, shops will be closed, transporters will stop work, the road will not be open for people to move. For this reasons we are asking our brothers in the civil society organizations and every other organization considering putting up a protest to sheathe their sword and to see that protest is absolutely unnecessary at this time.

“We ask everybody to look beyond the politics surrounding the issue, we are asking everybody to support and give peace a chance and of course we do understand that the NNPC is trying under the leadership of GMD, Mele Kyari and all other top management because nobody would want to bring hardship to his people. So we are asking that whatever protest of any kind should be suspended.

“As for MOSIEND, we do not want to protest; we are not part of any protest and of course we are going to do everything possible to support the NNPC and the system to make sure that the scarcity is brought to a stop. We have resolved to partner, encourage and to propel the NNPC to do the needful to end the current scarcity.”