on: August 12, 2018In: Community Development, featured 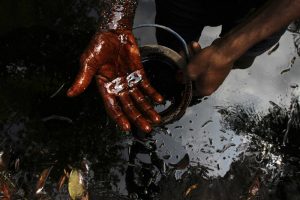 *A man samples crude oil at the bank of a polluted river in Bidere community in Ogoniland in Nigeria’s delta region.  REUTERS/Akintunde Akinleye

09 August 2018, Sweetcrude, Port Harcourt — The Movement for the Survival of the Ogoni People, MOSOP, says the Federal Government and the Shell Petroleum Development Company of Nigeria Limited ought to be ashamed of their conduct in Ogoniland rather than speaking of cleanup plans for Ogoni as an achievement.

Nsuke maintained that Shell must be brought to justice following over the more than 4000 people of Ogoni that have died from state-sponsored persecution and terminal diseases, which according to him, now threatens every individual living in Ogoni.

He called on President Muhammadu Buhari to decriminalize the Ogoni nine, including Ken Saro-Wiwa who was executed on November 10, 1995, and stop further abuses on Ogoni People, adding that Shell must be made to compensate the Ogoni People for their losses.

“It is absurd to celebrate a shameful conduct like we have seen with Shell in Ogoniland. Shell polluted the area and denied any wrongdoing, now a scientific report has unveiled the misconduct they hid for over 50 years.

“It is quite unfortunate that after over 50 years of polluting Ogoniland, our government and Shell do not understand that they should be apologizing to the Ogoni People and hurry to restore the land.

“Shell and the Federal Government’s conduct over the Ogoni issue is a shame because the government and Shell have watched over the destruction of Ogoniland and now want us to celebrate them because they want to use the cleanup to ‘Nicodemously’ resume oil production in Ogoni.”