Most Louisiana refineries running as storm cuts 70% of offshore oil 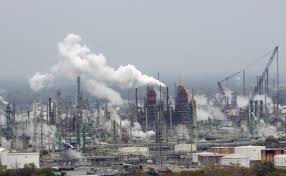 One refinery was taken out of production on Friday due to the threat of flooding, while seven others in southeastern Louisiana remain in operation on Saturday, the companies and sources familiar with plant operations said.

The Louisiana Offshore Oil Port, the only U.S. location loading and offloading giant oil tankers, was operating normally on Saturday, a spokesman said.

Barry reached hurricane strength on Saturday morning before coming ashore near Intracoastal City, Louisiana, at about 1 p.m. CDT (1800 GMT) and quickly weakened with maximum sustained winds of 70 miles per hour (115 km per hour).

“Utilities at the facility remain active to allow for restart activities to begin as soon as it is safe to do so,” Gannon said.

Barry is forecast to move slowly across Louisiana as it did across the Gulf since emerging off the coast of Florida on Wednesday. The storm is expected to drop 2 feet of water in areas east of its center over the weekend.

Also in the U.S.-regulated areas of the Gulf of Mexico, natural gas output from offshore platforms had been cut by 56% or 1.5 billion cubic feet per day, the U.S. Bureau of Safety and Environmental Enforcement (BSEE) said on Saturday.

Oil producers have shut 283 offshore platforms, or 42%, in the northern Gulf of Mexico, BSEE said.

Shell spokesman Ray Fisher confirmed the Norco refinery and the company’s 221,270 bpd-Convent, Louisiana, refinery were operating but did not discuss production levels.

The major threat to the refineries is heavy rainfall, with wind seen as a lesser risk as the plants are east of the storm’s center, which produces the highest winds.