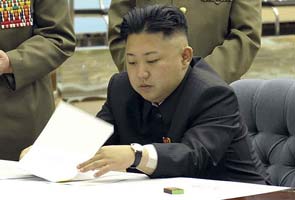 03 April 2013, London – North Korea said Tuesday it would restart a nuclear reactor to feed its atomic weapons programme, in its clearest rebuff yet to UN sanctions at the heart of soaring tensions on the Korean peninsula.

The announcement was the latest in a series of aggressive statements by Pyongyang that have prompted the deployment of nuclear-capable US B-52s, B-2 stealth bombers and a US destroyer to South Korea on “deterrence” missions.

A Pyongyang government nuclear energy spokesman said the move would involve “readjusting and restarting” all facilities at the main Yongbyon nuclear complex, including a uranium enrichment plant and a five-megawatt reactor.

The aim was to “bolster the nuclear armed force both in quality and quantity”, the spokesman was quoted as saying by the official KCNA news agency.

The North shut down the Yongbyon reactor in July 2007 under a six-nation aid-for-disarmament accord, and destroyed its cooling tower a year later.

It was the sole source of plutonium for the nuclear weapons programme.

Experts say it would take six months to get the reactor back up and running, after which it would be able to produce one bomb’s worth of weapons-grade plutonium a year.

North Korea revealed it was enriching uranium at Yongbyon in 2010 when it allowed foreign experts to visit the centrifuge facility there, but insisted it was low-level enrichment for energy purposes.

The mention of “readjustment” will fuel concerns that it will be upgraded — if it hasn’t been already — into a facility for openly producing weapons-grade uranium.

Tuesday’s announcement triggered international alarm, with North Korea’s only major ally China among the first to voice regret and call for restraint.

Kim Yong-Hyun, a North Korea expert at Seoul’s Dongguk University, said the nuclear initiative was in a different league from the military bluster of recent weeks.

“This goes beyond mere provocation. It’s a strong, tangible move and perhaps the one that will force the US into the direct dialogue Pyongyang wants,” Kim said.

The prospect of North Korea on a joint plutonium and uranium enrichment path is a hugely worrying one for the international community.

The North has substantial uranium ore deposits which provide a quick route to boosting reserves of fissile material, while plutonium has the advantage of being easier to miniaturise into a deliverable nuclear warhead.

“The international community has spent years working to stall and roll back the North’s nuclear programme,” said Mark Fitzpatrick, director of the non-proliferation unit at the International Institute for Strategic Studies in London.

“If the North now does what it says it’s going to do, it’ll be pushing ahead with both barrels,” Fitzpatrick told AFP.

Many observers believe the North has been producing highly-enriched uranium in secret facilities for years, and that the third nuclear test it conducted in February may have been of a uranium bomb.

Its previous tests in 2006 and 2009 were both of plutonium devices.

The Korean peninsula has been caught in a cycle of escalating tensions since the February test, which followed a long-range rocket launch in December.

Subsequent UN sanctions and annual South Korea-US military exercises have been used by Pyongyang to justify a wave of increasingly dire threats against Seoul and Washington, including warnings of missile strikes and nuclear war.

But the tough talk has yet to be matched by action.

“Despite the harsh rhetoric we’re hearing from Pyongyang, we are not seeing changes to the North Korean military posture, such as large-scale mobilisations,” said White House spokesman Jay Carney.

The nuclear announcement followed a top-level meeting Sunday of the North’s ruling party, at which young leader Kim Jong-Un stressed the importance of upgrading the “quantity and quality” of the country’s nuclear arsenal.