Namibia: UN expert calls for greater inclusion of indigenous peoples at all levels 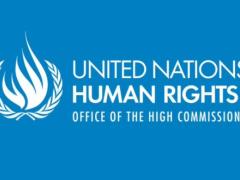 “Like many other countries around the world that have experienced European colonization and waves of migration, indigenous groups that are in the minority in Namibia have suffered injustices in the past that leave them disadvantaged, to varying degrees, in the present,” Mr. Anaya said at the end of his nine-day official visit to the country.

“These groups have expressed to me a strong desire for greater inclusion in decision-making at all levels, to be able to genuinely set their own priorities for development, and to regain or strengthen rights over lands and natural resources, particularly lands to which they retain a cultural attachment,” he revealed.

The rights expert welcomed Namibia’s initiatives for the development of San and other minority communities. However, he stressed, “I have detected a lack of coherent Government policy that assigns a positive value to the distinctive identities and practices of these indigenous peoples, or that promotes their ability to survive as peoples with their distinct cultures intact in the fullest sense, including in relation to their traditional lands, authorities, and languages.”

The UN Declaration on the Rights of Indigenous Peoples, Mr. Anaya recalled, states that indigenous peoples have the right to maintain their distinct identities and cultures as a basis of their development and place in the world, to pursue their own destinies under conditions of equality, and to have secure rights over lands and resources, with due regard for their traditional patterns of use and occupancy.

“With respect to the San peoples in particular, who were the primary focus of my visit, I recognize that, especially in recent years, the Government has entered into some innovative arrangements with San tribes through which they have been able to increase their control over management of land areas and derive some substantial benefits,” the Special Rapporteur said.

However, he noted that there are still also numerous San communities that were entirely dispossessed of their lands prior to independence, and those lands are now in the hands of the State and private landowners. “These communities face serious social and economic conditions with scarce employment opportunities,” he said.

“All of the groups with whom I met uniformly expressed to me their strong desire for increased educational opportunities, but identified numerous barriers in this connection,” the expert said. “Despite the guarantee in the Constitution that primary schooling be provided free of charge, and the commendable policy of the Ministry of Education to provide early schooling in indigenous languages, I have heard numerous accounts that these directives are not being effectively implemented on the ground.”

Mr. Anaya heard concerns that many communities do not have recognized traditional authorities, and that minority indigenous communities are often placed under the jurisdictions of chiefs of neighboring dominant tribes, who make decisions on behalf of the minority communities. In his view, the lack of recognition of traditional chiefs is, in accordance with Namibian law, relates to a lack of recognition of the minority indigenous tribes’ communal lands.

The Special Rapporteur held meetings with Government representatives, including from the Office of the Prime Minister and its Division of San Development, and the Ministries of Environment and Tourism, Justice, Lands and Resettlement, and Education. He also met with the Ombudsman, and with representatives of non-governmental organizations and UN agencies.

Mr. Anaya will present a comprehensive report on his visit to Namibia at a forthcoming session of the Human Rights Council.