SINGAPORE — The specter of negative prices is hanging over energy markets more than a month after oil’s unforgettable crash below zero.

While crude has staged a rapid recovery after a deal by the biggest producers to curb a surplus, the $600 billion global gas market remains extraordinarily oversupplied. Traders and analysts say the worst may be yet to come as demand falls and storage nears capacity, creating the ideal conditions for negative prices in some parts of the world.

It shows just how far the global energy industry is from recovering from a pandemic-fueled slide in demand and signals more pain for producers from the shale fields of Texas to Australia’s Curtis Island. Unlike the oil market, there’s been no sign of a coordinated response to address the glut, meaning the fallout could be deeper and longer. 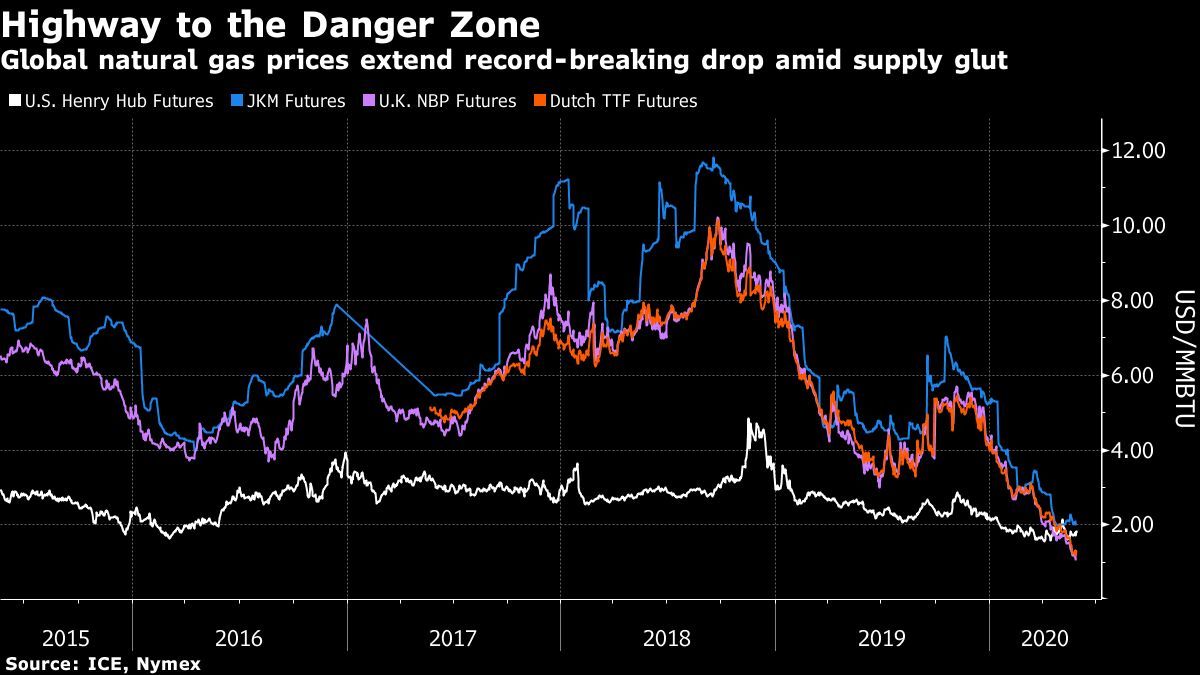 “We are in uncharted territory with low demand levels and high storage stocks,” said Guy Smith, head of gas trading at Swedish utility Vattenfall AB. “In the shorter term there is real risk that conditions may be set to allow negative prices in Europe, but only in the very short term.”

The fuel, used to generate power and heat and as a feedstock for chemicals and fertilizers, was already slated to have a terrible year after a mild winter exacerbated a glut. But things turned from bad to worse as the pandemic hammered demand, forcing major buyers to reject deliveries. Meanwhile, top sellers haven’t yet throttled back enough output as stockpiles near capacity.

Like oil’s brief plunge in April below minus-$40 a barrel, the key factor is the lack of storage to absorb excess supply. Traders and analysts point to Europe as the first market likely to hit that crisis point, which could have ripple effects for buyers and sellers from the U.S. to Asia.

While the oil market has a broad, if fragile, alliance of producers to manage production and rescue prices, led by Saudi Arabia and Russia, the gas market lacks a coordinated approach, allowing the current oversupply to drift unchecked.

With a deep bench of buyers across utilities and trading houses and flexible infrastructure that can both import and export cargoes, Europe has in recent years become known as the “sink” for global gas — balancing booming output from the U.S. with the increasingly energy-hungry economies of Asia, led by China.

That roll may soon be challenged as inventories across Europe are at a seasonal record of 73% capacity, compared with the 5-year average of 45%, according to data compiled by Gas Infrastructure Europe.

“European gas storage inventory is the biggest risk for global gas markets,” said Edmund Siau, a Singapore-based analyst at energy consultant FGE, who expects the region’s storage to hit capacity in August. “Gas prices will see increasing downward pressure and volatility as the market gradually loses one of the tools to balance itself.”

One European market in particular has come in focus as the most likely to go negative. While the world’s four major indexes have converged near historic lows, the U.K.’s National Balancing Point is the weakest, with the next-day contract recently dropping to the equivalent of about $0.99 per million British thermal units.

“If we see below-zero gas prices in Europe, we will see it in the U.K.,” said Hadrien Collineau, senior gas analyst at Wood Mackenzie Ltd. “The market is constrained by its physical capacity, and once storage sites are filled, prices can go below zero. The U.K. doesn’t have much place for more gas, while we still have space in continental Europe.”
The U.K.’s storage capacity declined drastically after Centrica Plc’s Rough facility closed in 2017.

European prices would be more likely to flip negative in the prompt contracts — such as within-day or day-ahead rather than contracts further out — when storage injection rates are low and demand is weak due to mild, windy weather, according to Nick Boyes, an LNG and gas analyst at Swiss utility and trader Axpo Group.

“I think the highest possibility of this happening is in August or early September when we have a greatest coincidence of both lowest demand and highest storage inventories,” he said.

Natural gas is no stranger to negative prices. The U.K.’s NBP plunged below zero in 2006 after a pipeline opened for commercial imports from Norway. That plunge was more of an operational issue from the pipeline than a market trend, and it wasn’t in the middle of a bearish market, such as the one today, according to James Huckstepp, manager of EMEA gas analytics at S&P Global Platts.

In the U.S., associated gas, a byproduct of shale drilling, has periodically gone negative due mainly to increased production coming up against limited transport capacity at places such as the Waha Hub in West Texas.

While some estimates have Europe’s storage facilities hitting capacity as soon as next month, analysts at Morgan Stanley and Platts see it getting close but just missing it. Still, sub-zero prices are a possibility even if hitting “tank tops” is avoided.

“It may require a short period of negative prices to make suppliers understand the gravity of this situation — and this is before storages are completely full,” said Jonathan Stern, senior research fellow at the Oxford Institute of Energy Studies.

While traders and analysts surveyed by Bloomberg last month noted that there’s a possibility sub-zero gas could emerge in Europe, most said the chances are slim as suppliers would likely quickly respond before it gets to that point.

Indeed, there are some signs that supply is easing.
Buyers of U.S. liquefied natural gas have canceled dozens of cargoes scheduled for the summer. Meanwhile, shipments from nations including Malaysia, Brunei and Norway dropped last month, when global LNG export growth halted years of expansion.

But overall, according to FGE’s Siau, there hasn’t been a large enough output curb to balance the market and stop a further price slide. Flows from top exporter Russia through its Yamal-Europe pipeline, for instance, fluctuated at the end of May but have increased again this month.

Qatar’s energy minister said last month that there would be something “drastically wrong” with the market if the country stopped selling LNG because of low prices. Meanwhile, LNG consumption this summer is forecast to drop 2.7%, the first seasonal demand contraction since 2012, Robert Sims, a research director at Woodmac, said in a note.

“I expect lower for longer — but we might get stuck into this bad equilibrium, too low to make real money as a supplier but not low enough to unlock a huge tranche of demand,” Nikos Tsafos, senior fellow at the Center for Strategic and International Studies, said by email. “What’s the floor? Frankly we have no idea. We haven’t seen prices like these ever before.”