Navy arrests suspected oil thieves with 408 drums of AGO 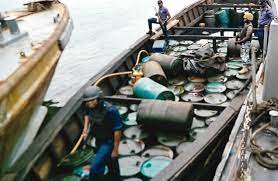 Commanding Officer, Naval Forward Operating Base in Ibaka, Mohammed Abu, while handing the suspects and exhibits to operatives of the Nigerian Security and Civil Defence Corps for prosecution, said the suspects were petroleum pipeline vandals.

Abu said NNS Thunder, had on November 26, while on routine patrol, intercepted and arrested the suspects, with three wooden boats used in conveying the illegal AGO.

“I will be handing over the suspects and exhibits of wooden boats that were intercepted by the NNS Thunder on November 26, at high sea, having infracted the economic policy of the country.

“The Chief of the Naval Staff has given a clear directive to the Nigerian Navy to free the waterways of illegalities and other maritime crimes.

“So, having said this, we have three wooden boats which were conveying 408 drums of AGO and 40 drums of PMS mixed with oil, 906 empty drums and 35 male suspects are here before you.

“I am handing them over to you, as the prosecuting agency to carry out further investigation and prosecute them accordingly and revert to the Nigerian Navy on the outcome,” Mr Abu said.

The commanding officer said the arrest of the suspected vandals was a clear message that the Navy would not tolerate any act of economic sabotage in the Nigerian maritime environment.

Receiving the suspects and exhibits, the Head, Anti-Vandalism Unit of NSCDC, Akwa Ibom Command, Adamu Jafa’aru, assured that the Corps would carry out thorough investigation and all those found culpable would be arraigned.

Jafa’aru who commended the Navy for their resilience and doggedness in ensuring safety across Nigeria’s maritime environment, warned vandals to desist from sabotaging the nation’s economy, stressing that the Corps would not relent in protecting the country’s critical infrastructure.