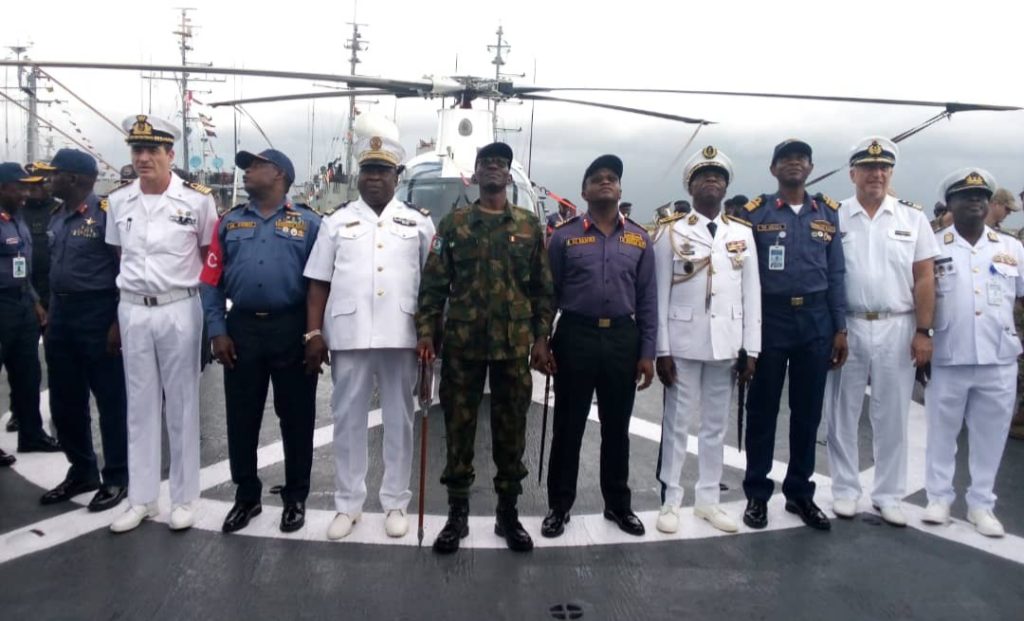 *The Chief of Defence Staff, Gen. Leo Irabor, flagging off Exercise Edi-Diana, with Naval Chiefs and Officers of participating countries, in Onne, Rivers State on Monday.

Port Harcourt — The Nigerian Navy on Monday flagged off a multinational maritime exercise, codenamed Exercise Edi-Diana, as parts of efforts to tackle maritime security threats within the Gulf of Guinea.

The Exercise is in collaboration with West and Central African countries, including Togo, Cameroon, Ghana, the European Union and the United States Coast Guards, will tackle anti-piracy, illegal and unregulated fishing as well as very other maritime security threats.

Flagging off ‘Exercise Edi-Diana’, the Chief of Defence Staff, Gen. Leo Irabor, at the Federal Ocean Terminal, Onne Rivers State, urged the Nigerian Navy to strengthen its collaboration with other countries Navies to fight maritime insecurity in Gulf of Guinea and Africa in general.

Irabor said it is by building forces together and collaboration that the country will be able to access the benefits inherent from ocean, not only for Nigeria but equally for the comity of nations.

Asked on the benefit of the Exercise, the Defence boss said a huge benefit lies ahead as the country will be able to explore the blue economy which will aggregate to the country’s GDP.

“The whole essence is to rid our maritime domain especially the Gulf of Guinea of every maritime security threats. This exercise is to galvanize the capacities of the various participating Navies so that together we can achieve the security within our commons.

“As you are aware, this exercise is one of the events lined up to celebrate the 66th anniversary of the Nigerian Navy. It is important to state that this exercise is unique as it serves dual purpose.

“First, it is to celebrate Nigerian Navy anniversary while the second is to foster collaboration to enhance maritime security. There is no doubt that ensuring efficient maritime could be realized through collective effort rather than individual states acting independently.”

Earlier in his address, the Chief of Naval Staff, Vice Admiral Awwal Gambo, said the ‘Exercise Edi-Diana’ presents ample opportunity for the Nigerian Navy to work together with other national and regional navies in the spirit of the Yaounde Accord.

“It is therefore important for Gulf of Guinea nations build and improve capacity to secure maritime routes transiting the Gulf of Guinea. Exercise Edi-Diana presents that ample opportunity for the Nigerian Navy to work together with other national and regional navies in the spirit of the Yaounde Accord.

“As mentioned by the officer conducting the exercise, the Nigerian Navy will deploy eight ships, two helicopters as well as elements of the Special Force service for the exercise.

“With ships from other participating Navies including Cameroon, Ghana, Togo and Italy, I have confidence that the exercise will positively impact on all participating nations.”