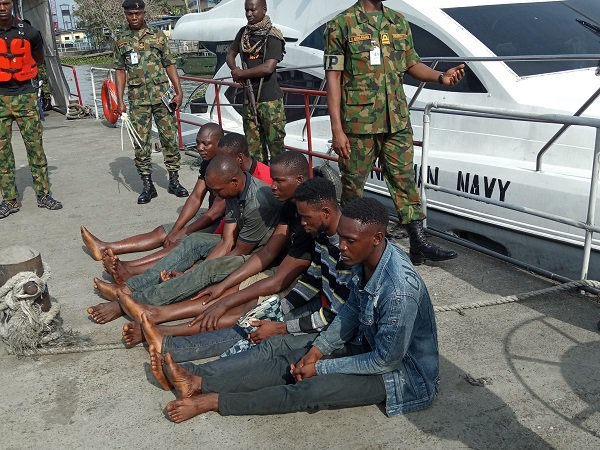 *A cross section of suspected oil thieves paraded before being handed over to the headquarters of the Joint Task Force (JTF), codenamed Operation Delta Safe.

08 March 2019, Warri, Delta State — The Navy has handed over six suspects arrested with 540,000 litres of illegal diesel to security agencies for investigation in Warri, Delta state.

Navy Captain Adeyemi Adewuyi who handed over the suspects at the Nigerian Naval Shipyard, NNS, Delta, in Warri said they were arrested with eight Cotonou boats, carrying the illegal diesel.

“The boats were eight in number but one of them sank. They were arrested on March 6 at Okudeburo creeks, Warri Southwest Local Government Area on their way to Ugbonla in Ondo state.

We are handing over the suspects to the appropriate security agencies for further investigation, ” he said.

Captain Adeyemi who represented  Commodore Ibrahim Dewu, Commander of NNS Delta, said the navy will flush out oil thieves from the creeks.