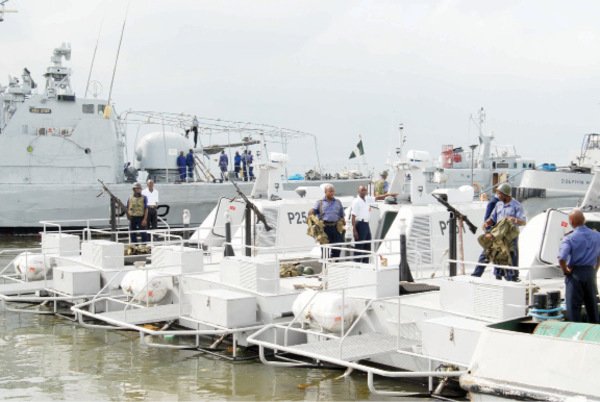 Port Harcourt — The Nigerian Navy says it has intensified its operation engagements to neutralize activities of economic saboteurs in the maritime environment, assuring of its commitment to eliminating criminal activities from the country’s territorial waters.

The Chief of Naval Staff, Vice Admiral Awwal Gambo, disclosed this in Port Harcourt, during a special Juma’ah prayer, as well as an interdenominational church service at the NNS Pathfinder Base, as parts of the Nigerian Navy’s 66th anniversary activities.

Activities for the 66th anniversary of the Nigeria Navy also include golf tournament at the NNS Pathfinder golf course, International Maritime Conference, Exercise Remex, amongst others.

Gambo who decried the negative effects of the activities of maritime criminals to the nation’s economy, assured that the Nigerian Navy under his watch was on the path of realization of the vision of being a strong, formidable and credible Navy.

He lauded the supports of President Muhammadu Buhari to the Navy, especially for the acquisition of the modern ship tank into its fleet, NNS Kada, from the United Arabs Emirates, which arrived the country at the weekend.

“As we celebrate this year’s anniversary, let us commemorate our milestones and also pledged our commitment towards the realization to to the vision to be a strong formidable and credible Navy that our maritime nation can be proud of.

“Notably, the security of the Nation’s maritime space is being undermined by series of illegal activities perpetrated by criminal elements. Accordingly, the Nigerian Navy had to intensify operation engagements to neutralize activities of these economic saboteurs in the maritime environment with resounding success.

“This has been made possible with the support of Mr President, Commander-in-Chief of the Armed Forces, Muhammadu Buhari GCFR, resulting in the acquisition of modern platforms, the latest of which is the acquisition of a Landing Ship Tank NNS Kada, which arrived in Lagos today after spending 56 days covering a distance of 8,414.34 nautical miles from United Arab Emirates.”

The Naval boss also disclosed that the Nigerian Navy, over the years has always ensured personnel welfare, their physical, intellectual, mental and moral training as well as spiritual upliftment are given prompt and due attention required.

On the golf tournament, the CNS said friendship and spirit of togetherness were visible throughout the period of the tournament, noting that everyone’s contribution in the game has promoted solidarity.

“The game of golf has become an important event on the Nigerian Navy sports calendar as well as platform for friendship, and cultural exchanges across the country.

“As the Nigerian Navy continues to accomplish giant strides in the constitutional role of ensuring security of the maritime domain, plans are also in place to sure that personnel are fit, to sustain the achievements.

“This is the reason the Nigerian Navy will continue to encourage active participation on sporting activities, locally and internationally.” the CNS promised.

Also speaking at the golf tournament, the Special Guest of Honour and Board Chairman, Sealord Golf Club, Rear Admiral Ochegemie Fingesi (Rtd), thanked the CNS for the decision to bring part of the 66th anniversary of the Nigerian Navy to Port Harcourt.

Fingesi described the game of golf as game of life, urged those who want to live healthy life to play golf, according to him, “if you want to be falling sick and always visit hospitals, then join other sports.”