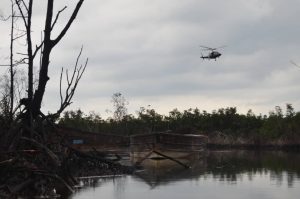 *Naval helicopter carrying out aerial surveillance of the area

Naval Commander, NNS Pathfinder, Commodore Suleiman Ibrahim, while conducting newsmen round the impounded boats with the crude oil in Obomakiri, said investigations revealed that the crude oil was stolen from a manifold operated by an oil firm within the area. 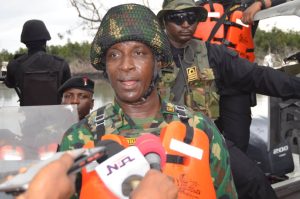 Ibrahim regretted that Nigeria has not been able to meet up its quota in crude oil production as a result of the activities of crude oil thieves, assuring that the Nigerian Navy was making efforts to curb oil theft in the region, especially with the recent launch of two operations.

“Just behind you, there is where we refer to as ‘Market Square”, that is over 50 square kilometers where stolen crude was illegally cooked. As it stands now, there is no more cooking activity taking place there.

“Along the line, we were very curious to find out where the source of the crude oil they were cooking at the market square, was coming from.

“If you look behind us, you will see a Nigerian Navy helicopter carrying out an aerial surveillance and this was made possible with support from the Chief of Naval Staff, who has deployed resources and enough men to make sure that these illegal activities are put to a stop.

“Yesterday, our tactical riverine squadron was able to identify the source of the crude oil theft. Then, with the aid of the Nigerian Navy helicopter, we were able to deploy our men. When we came here, we discovered four boats but one has sunk already and few of them are still floating. We also discovered a manifold where these products are being stolen from.

“Additionally, we have gotten support from Joint Taskforce, Operation Delta Safe. As it stands, we have an ongoing operation aimed at boosting crude oil production for Nigeria and at the same time, halting crude oil theft.”

The NNS Pathfinder Commander also sent a strong warning to those involved in oil theft to desist from it, as the Nigerian Navy will not rest on its oars in ridding the country of every form of economic sabotage.

He said no suspect was arrested as the oil thieves fled into the surrounding swamps, on hearing the sound of the Naval boat engines.

“We observed that as we came in through the creek and behind us, there are a lot of swamps. So, when they (oil thieves) heard the sound of the engines, they abandoned their wooden boats or what do you call it, Cotonu boats and used the swamps to disappear. But, we are making efforts to get them arrested.

“Those we arrested in the past, we handed them over to either the EFCC or the NSCDC. As it stands, the Nigerian Navy does not have the legal rights to charge criminals to court.”