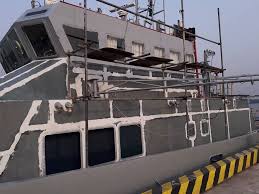 *A vessel under maintenance at the Navy Shipyard in Port Harcourt.

Port Harcourt — The Nigerian Navy says it has entered into a joint venture partnership with a Chinese firm, to construct and repair ships at its Naval Shipyard located in Reclamation Road, Port Harcourt, Rivers State.

To this end, the Nigerian Navy has called on the Niger Delta Development Commission, NDDC, to partner with the Naval Shipyard on shipbuilding and repairs, in order to generate employment and boost economic activities in the region.

Speaking during a thank you visit with the management of NDDC, the Commodore Superintendent, Naval Shipyard Limited, Commodore Abolaji Orederu, commended the Commission for its efforts in facilitating the sustainable development of the Niger Delta region.

Orederu commended the Acting Managing Director of NDDC, Prof. Nelson Brambaifa, for repairing Reclamation Road, where the Naval Shipyard is situated in Port Harcourt, saying that the rehabilitation of the road has revived the fortunes of the shipyard and businesses in the area.

“Thank you the Acting Managing Director and entire management of NDDC, for rescuing us from many years of discomfort and hardship. Reclamation Road was in a very bad state. I sought the permission of the Chief of Naval Staff to approach your organization and eventually approval was given, the contract was awarded and the road has been done.

“The completion of the road has given us a brand new life. NDDC has alleviated the sufferings of thousands of people living in that area and we cannot thank NDDC enough.

“NDDC is indeed doing an outstanding job in the region, by creating the enabling environment for economic growth. As I speak, the Nigeria Navy has entered into a joint venture with a Chinese company to build ships at the Naval shipyard. The rehabilitation of that road was Godsent.

“We intend to build boats for you; hospital boats that can go to the creeks and do medical missions where you cannot easily set up hospitals, as well as transport and passengers boats.”

Responding, the Acting Managing Director of NDDC, Professor Nelson Brambaifa, said the Commission was committed to creating wealth and reducing poverty in the Niger Delta, as a strategy to resolving all the developmental challenges in the region.

Brambaifa disclosed that NDDC has partnered with the Nigerian Navy to undertake 17 projects, out of which 11 have been completed, which include eight buildings and three road projects.

“NDDC understands the importance of these projects and we will continue to partner with the Navy and our security agencies to maintain peace and security in the region and, in the case of the Naval Shipyard, help in creating job opportunities and wealth for the people.

“For over 25 years, Reclamation Road had remained impassable and I am proud, as a true Niger Deltan, to have been part of the team that rebuilt it. Even though it only covers 2.6 kilometres, the significance of the road is multifaceted. I am happy to note that, besides the shipyard, the Port Harcourt Boat Club and other industries in the Macobar area are coming back to life.”

Also, the Acting Executive Director, Finance and Administration of NDDC, Dr. Chris Amadi, applauded the Nigerian Navy for appreciating the Commission, while describing the gesture was unprecedented.

“What you have done today will be clearly recorded in the history of NDDC. It is rare for any Nigerian or institution to express appreciation like this.

“What you would rather see in our country is more of condemnation and negatives, When you find positives like this, when you see people who appreciate what you are doing and what you have done, it emboldens you to remain committed to serving the people.”