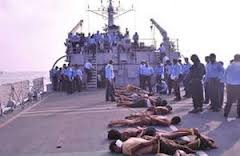 20 August 2013, Warri – Operatives of the Nigerian Navy in Warri, Delta State have killed 12 suspected oil thieves and arrested four others in a fierce gun battle at Forcados in Burutu Local Government Area of the state.
It was gathered that the encounter was a result of coordinated operation by the Western and Central Naval Commands, Lagos and Yenagoa respectively with the assistance of a surveillance helicopter from the Nigerian Air Force.

It was also gathered that the suspects and the vessel were monitored by the Naval Officers and men from last Friday till Saturday when negotiations began between the security men and the oil thieves which led to an agreement with suspects to hands off and release the vessel.

The Naval officers played along until about 7.00 pm last Saturday when the suspects agreed to disembark from the vessel off Forcados river, about 14 nautical miles from the coast as they observed the overwhelming presence of security men around the vessel.

It was gathered that at about 8.45 pm as the suspects finally disembarked on the condition that only one Navy vessel should remain in the vicinity of the hijacked one, they made a fast move towards the coastline in an escape bid and in the process engaged the Navy personnel in a gun duel.

At the end of the gun battle, which lasted about 30 minutes, sources disclosed, 12 of the suspects including the leader identified as Ben were killed while three surrendered to the rampaging Naval men.

The fourth suspect, it was learnt, was captured later during mop-up operation while trying to swim out of the troubled spot.

Briefing newsmen, yesterday, at the NNS Delta, Warri Base, the Flag Officer Commanding, Central Naval Command, Rear-Admiral Sidi-Ali Hassan Usman said five Naval ships, Manta and Rapid Response Boats were used during the coordinated operation with the help of the Nigerian Air Force, NAF, Maritime Patrol Aircraft, MAP, which carried out the sorties and fed the Navy with detailed location of the hijacked vessel.

He gave the detailed operation of his men which started last Thursday immediately the vessel was hijacked till last Saturday when his men engaged the oil thieves in a fierce gun battle leading to the death of 12 of them and arrest of four others.

Rear-Admiral Usman who was flanked by the Commanding Officer, NNS Delta, Commodore Mohammed Garba, Navy Captain Julius Nwagu; Commanding Officer, Intelligence, Lieutenant Commander Samuel Garbaand Commodore Emmanuel Enemor attributed the success of the operation to the encouragement and support of the Chief of Naval Staff, Vice-Admiral Dele Joseph Ezeoba in line with the transformation agenda of the Federal Government.

He said that the boat with which the suspects wanted to escape was sunk during the gun battle and the bodies of the dead could not be recovered because of the terrain of the scene of battle.

Rear-Admiral Usman acknowledged that one of the Naval boats was affected during the operation with a bullet hole on her body but assured that the damage was minimal and did not affect the Naval gun ship and warned other criminal elements in the region to be prepared for a hard time.