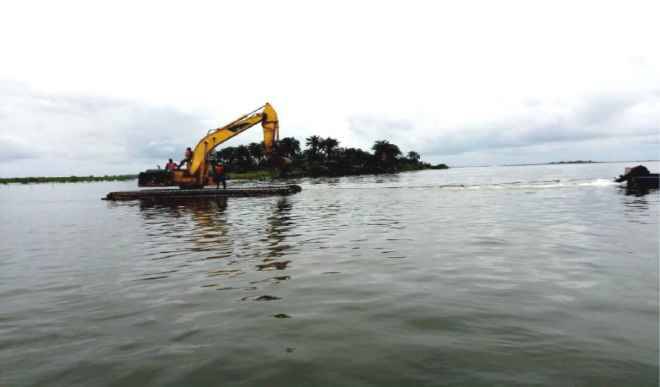 *Section of the Ogu/Bolo channel.

Port Harcourt — The Nigerian Navy says it has intercepted a barge, with the MV Josh1 and a wooden boat loaded with about 900,000litres of suspected stolen crude oil, drifting along Bolo creek in Ogu/Bolo Local Government Area of Rivers State.

Naval Spokesperson, Commodore Suleman Dahun, said the barge and the boat were recovered on January 29, 2019, while the boat was loaded with 2,500 litres suspected illegally refined Automated Gasoline Oil, AGO, commonly called diesel.

Dahun explained that there were no suspects on board the vessels when they were apprehended,

He called on owners of the said vessels and the products to come forward and reclaim ownership, otherwise, the Navy would handover the exhibits to EFCC after six months, in accordance with its Standard Operating Procedures on Arrest, Detention, and Prosecution of Vessels and Persons.

“The Nigerian Navy discovered a metal Barge MV JOSH 1 and a wooden boat drifting along Bolo Creek and recovered them on 29 January 2019.

“The barge and wooden boat were laden with an estimated 900,000 litres of a substance suspected to be stolen crude oil and 2,500 litres of product suspected to be illegally refined AGO. There were no suspects onboard the vessels at the time of the recovery.

“In the event of failure to reclaim seized and detained vessels by its owner for a period of 12 months, the Agency in Custody of the seized items as the case may be shall reserve the power to obtain an order of forfeiture and disposal from a court of competent jurisdiction.

“Accordingly, the general public is hereby notified that the Nigerian Navy will keep the Barge and wooden boat in its custody for a period of 6 months effective from the day of recovery. At the expiration of the 6 months period, it will hand over the vessels to EFCC to obtain forfeiture order in accordance with the law in the absence of any claim of its ownership.

“Consequently, owners of the vessels are advised to come forward and reclaim ownership of the vessels, failing which it will be handed over to the EFCC to obtain forfeiture order.”