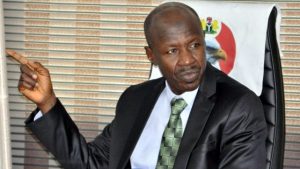 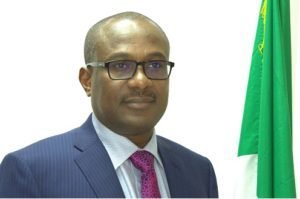 13 September 2018, Sweetcrude, Lagos — The management of Nigerian Content Development and Monitoring Board, NCDMB and the Economic and Financial Crimes Commission, EFCC plan to forge more effective collaboration for quick investigation of serious infractions by oil and gas companies in Nigeria.

Engr. Simbi Wabote, the Executive Secretary, NCDMB, who led the management of Board, dropped this hint during a courtesy visit to the Acting Chairman of the EFCC, Mr. Ibrahim Mustafa Magu at the Commission’s new Head Office Building in Jabi, Abuja on Tuesday. According to him, “we plan to refer serious fraudulent discoveries from the audit to the Commission for further action”, he intimated.

On the essence of the visit, Wabote said that “the Board will like to initiate the development of a MoU between the two agencies to enable quick deployment once the services of the Commission are required”.

He pointed out that “we regularly receive alerts via the whistleblowing portal on our website. We do our bit to investigate such alerts and believe some of the major findings may be candidates for referral to EFCC”.

Engr. Wabote noted that the EFCC is “one of the key agencies driving one of the core programs of His Excellency, President Muhammadu Buhari”, adding that the Commission “ has succeeded in building a reputation for itself locally and internationally as a fearless fighter in the war against corruption”. Thus, his Board is fully aligned with Mr. President’s fight against corruption. Which is why the Board attends to requests for information or clarifications about contract and oil and gas transactions under EFCC investigation expeditiously.

He stated the Board has put in place an Anti-Corruption and Transparency Monitoring Unit, headed by a senior member of the management team, to promote anti-corruption and ethical behavior and to investigate any internal infractions.

To foster a deeper relationship, Wabote indicated that the Board needs more support on the investigative side of our activities and the expertise of EFCC.

In his reply, the Acting Chairman of EFCC, Mr. Magu expressed delight at the visit and commended Engr. Wabote for the bold move to enlist the support of EFCC.

He stated that his Commission has partnered successfully with other government agencies to contain fraud and financial malpractices.

He emphasized that the fight against corruption should be viewed as everybody’s fight in Nigeria because it is the only way to save the economy from being wrecked by corrupt individuals.

He thanked NCDMB for the measures and structures put in place to promote transparency and ethical behavior, urging every stakeholder in Nigerian to join the fight and to preach against corruption in their spheres of influence.

He promised that his Commission is ready and willing to support the NCDMB to recover any money due it as an agency of the federal government. He expressed the desire for local content practice to be extended to other important sectors of the Nigerian economy.

On the part of the EFCC, the Acting Chairman, Mr. Magu, Mr. Osita Nwajah, Director, Public Affairs, Mr. Wilson Uwajarem, Head Media & Publicity and Mr. Ola Olukoyede, Chief of Staff to the Executive Chairman were on ground to receive the NCDMB team.